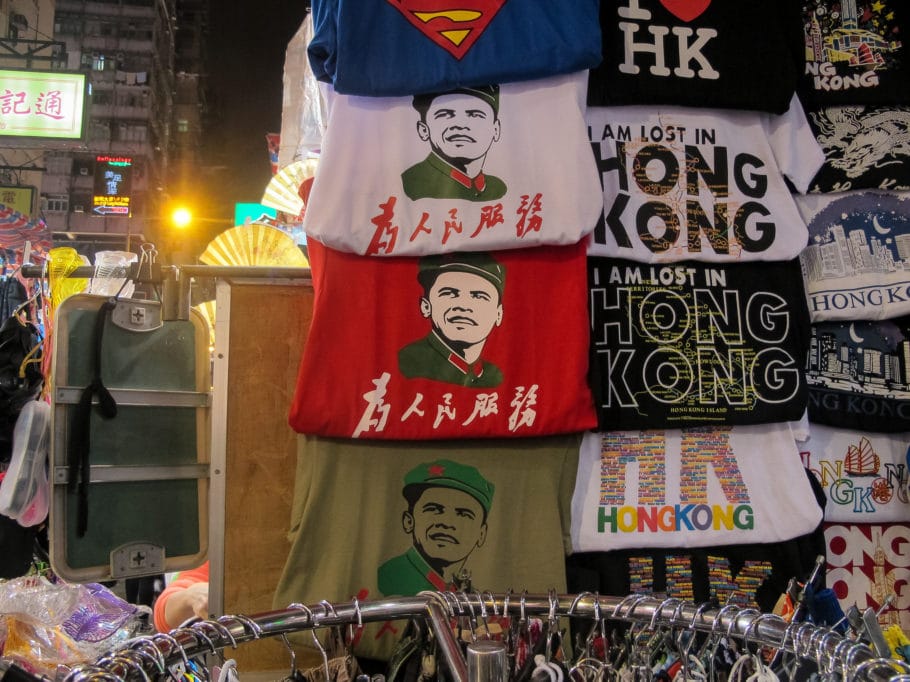 Whether you’re moving to Hong Kong or just visiting, here are some simple tips to help you navigate the streets and not get lost, or least keep getting lost to a minimum. Before I get started, let’s cover apps and other helpful necessities.

Now, on to the tips.

1. Don’t take the bus. At least don’t take the bus within the more populated parts of the city. If you need to go from Tung Chung to Mui Wo then fine, take the bus. But if you’re trying to get from Quarry Bay to Sheung Wan, the bus is not your friend, not yet anyway. The bus is a beast that must be tamed, and it can only be tamed if you spend a lot of time with it, getting to know it, its schedules, its drop off locations, and various quirks. 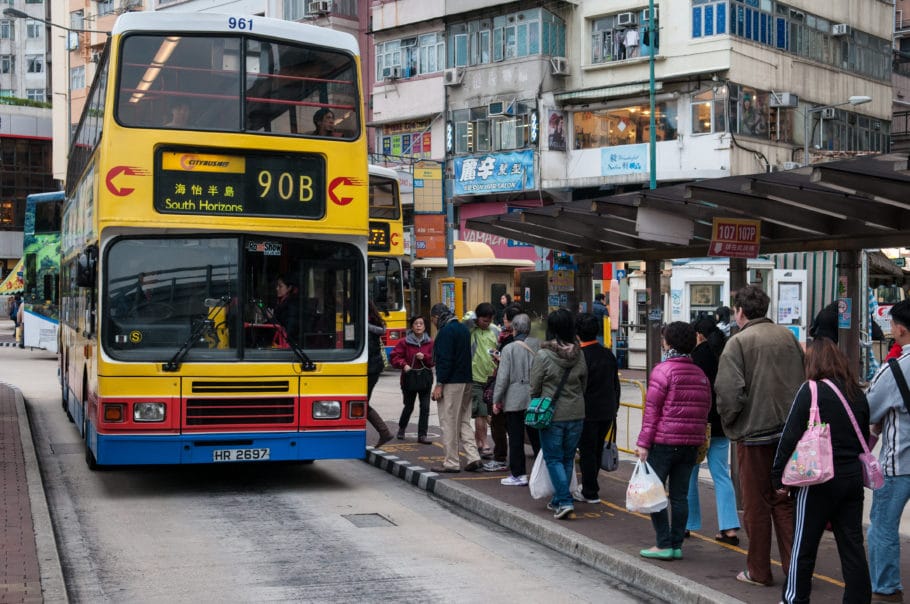 Don’t get me wrong, the bus system in Hong Kong is great–if you have a regular route you take every day, and you can memorize which bus to take, where to get on, and where to get off. It’s useful for traveling the same routes over and over again, not for getting around to new places. For example, I am frequently meeting with clients all over the city. If I depended on the bus I would constantly be late to my appointments. Likewise, if you’re visiting the bus is not what you want. You might visit some interesting places by using it, but they won’t be the places  you intended to go.

2. MTR for going far, for cheap. The MTR is the metro or subway. If you see a sign in the city that says “subway” don’t be fooled, it’s not telling you how to get to the MTR, it’s telling you where you can find a walkway that goes under a street and comes up on the other side, or where to buy sandwiches. People don’t call the MTR the subway here, and they don’t call it the metro, they call it the MTR and that’s that. 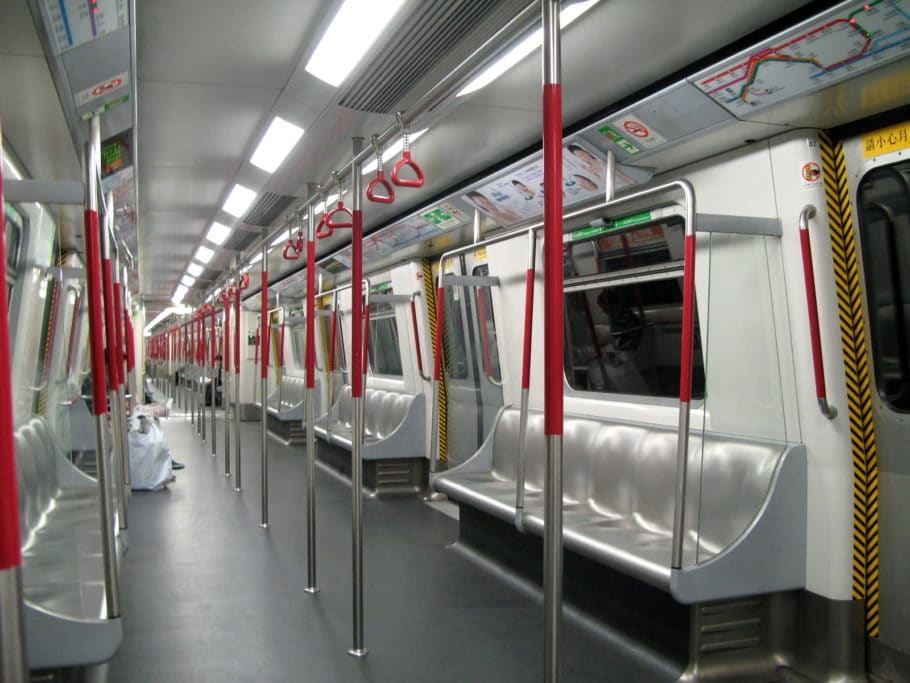 It’s usually not as empty as shown above. Sometimes quite the opposite.

The MTR is useful for getting to places that are far away fast and cheap, like if you want to go from Kennedy Town to Chai Wan. In many cases it will even be faster than taking a taxi, and a lot cheaper. I use it a lot. But be warned, if you’re new to the city it’s easy to get lost on the MTR as you get used to it. But don’t worry, there are helpful signs everywhere, including lighted maps on the MTR itself. And Google maps is pretty good at helping you navigate the MTR and figure out which exit to take to get where you’re going. And yes, there is 4G everywhere on the MTR, except sometimes for 5 seconds in between stops while you’re in the middle of the tunnel. The MTR is also clean, air conditioned, and safe.

3. Taxis for medium distances. The minimum fee for a taxi is $22 HKD, which is about $3 USD. If you’re more than a 10 minute walk from an MTR station, and where you’re going is more than a 10 minute walk from the MTR station at your destination, and there are just a few MTR stops in between, then I would grab a taxi. Going on the MTR involves some walking down and up just to get on the train and then exit from it. And if you’ve got 20 minutes walking time just to get to and from the MTR, you can probably get where you’re going in 10 minutes instead of 30, and you’ll be less sweaty, to boot. 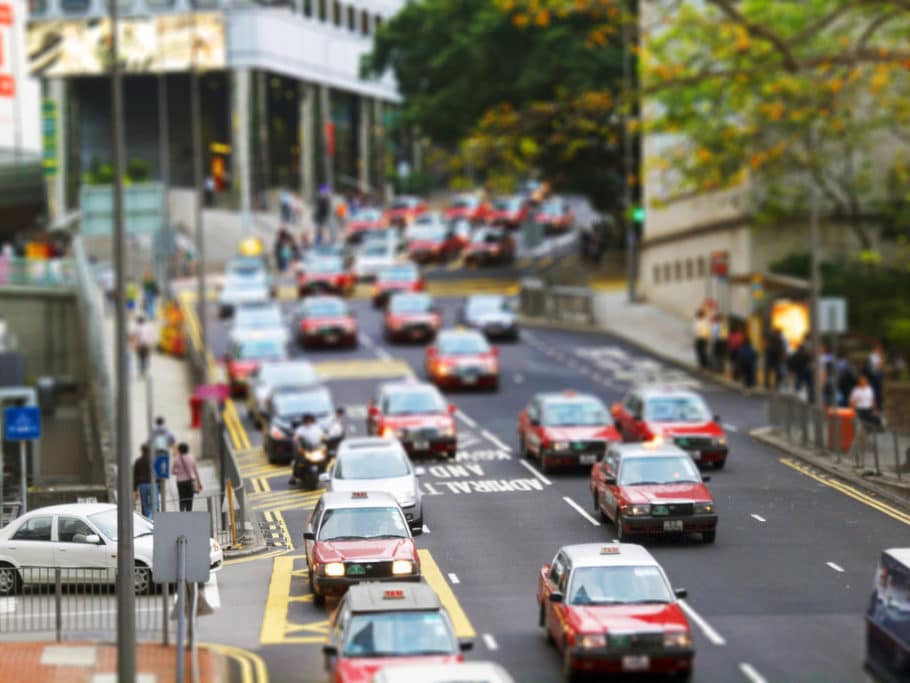 That’s another thing–in the summer I take the taxis a lot more, because even just walking to the MTR and then from it to an appointment means showing up with huge sweat spots all over my shirt.

Taxis can also be helpful if you’re in a rush to get somewhere, but not always. Sometimes it’s faster to get on the MTR and walk, especially if traffic is heavy and you’ll just be sitting in the taxi as people walk by you.

For some destinations a taxi is a must. Going from Central to Cyberport? There’s no MTR going out there, so it’s either taxi or bus, and you know how I feel about busses.

Where taxis don’t make sense is if you’re going long haul, and you’re going where MTR goes anyway. I would never take a taxi from Sheung Wan to Kowloon Tong, for example. It would probably take longer than the MTR, and cost 20x.

4. Streetcars for short distances. Along Des Voeux Rd. (yes, after 2 years I can spell it without looking it up!) there is a streetcar (or trolley or tram) that runs both ways. I struggled for a long time to make sense of why anyone would use this, because it seems quite slow, but I figured it out recently. If you need to go a short distance on Des Voeux Rd. such that you’re not sure whether you want to walk all the way down to the MTR, then all the way back up again, but you’re also not sure if you want to just walk all the way, then the streetcar is probably what you need. Jump on, jump off a minute or two later, and it’s cheap. And if you’re visiting for the first time, you should ride it back and forth once just for fun. 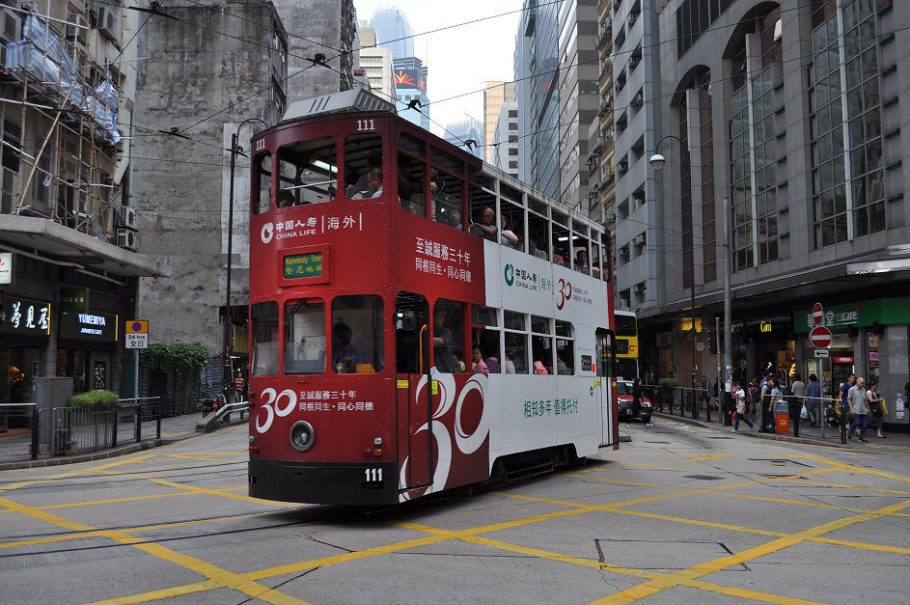 Minor trivia: The streetcar path used to be the edge of Hong Kong, with the ocean a few feet from the tracks. Everything between the streetcar tracks and the ocean today is reclaimed land. Here’s an old photo of where the streetcar runs today. 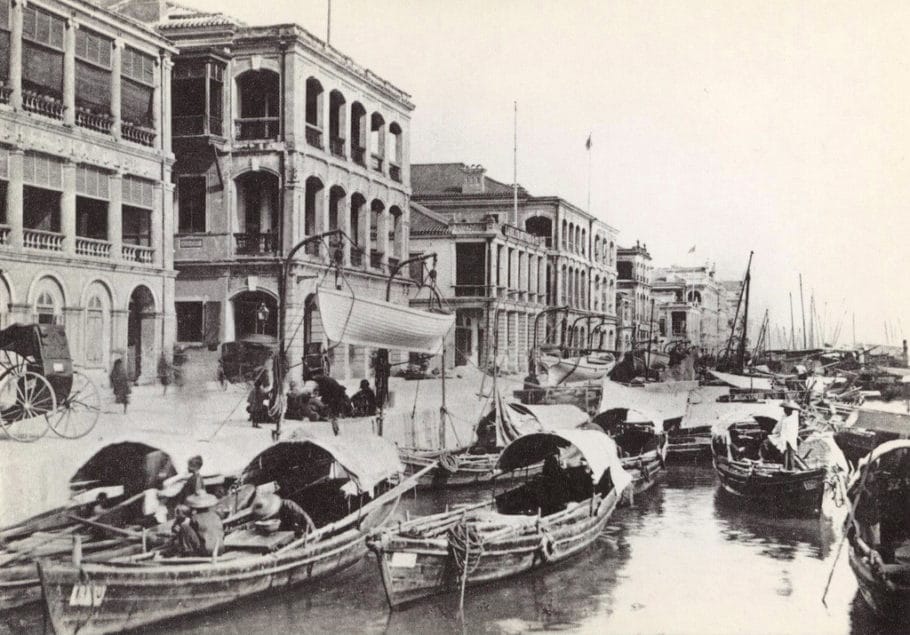 5. Walking. No matter what, you’re going to do a lot of walking in Hong Kong. Even if you take the MTR or a bus, you’re likely going to walk a few minutes to and from it. You might have to walk a ways to find a taxi after a meeting. Bring good walking shoes. 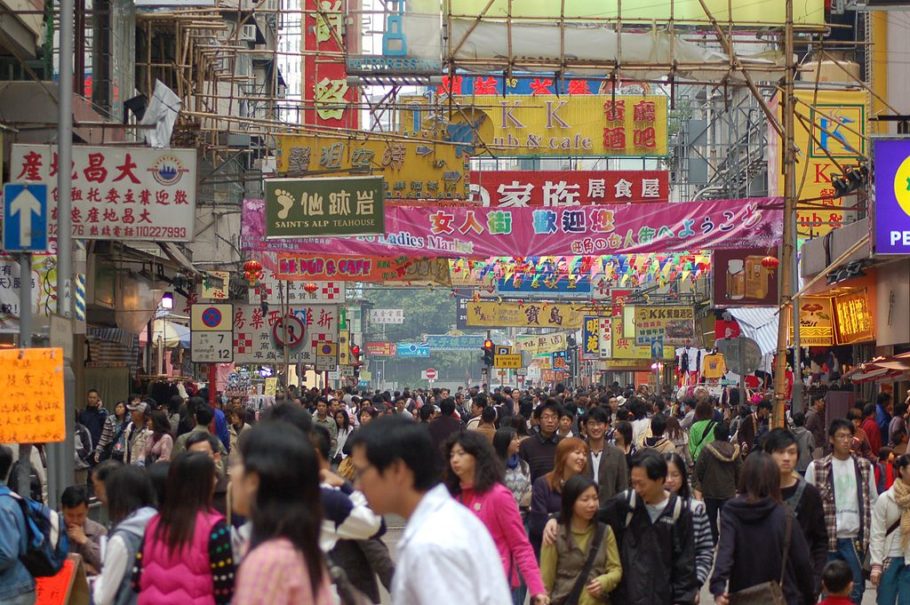 6. Outer islands. If you visit or choose to live on an outer island, you’re going to do a bit of walking, of course, but you may also want a bike or a car. On South Lantau almost everyone seems to have a bike, and ride it, and many people drive cars, if only locally. Driving around Central in Hong Kong would appear to be a habit for a privileged few, although from observing traffic there I’m not sure it’s much of a privilege.

To go back and forth from the outer islands you’ll mostly take ferries (yes, boats!), with Lantau Island, where the airport is located, being the notable exception. If you’re going from Central to the airport, or the reverse direction, then the airport express MTR is best since it’s direct and very fast. Otherwise it’s hard to make a general rule, since depending on where you’re going to or from it may make sense to take the normal MTR, a taxi, or even a bus. 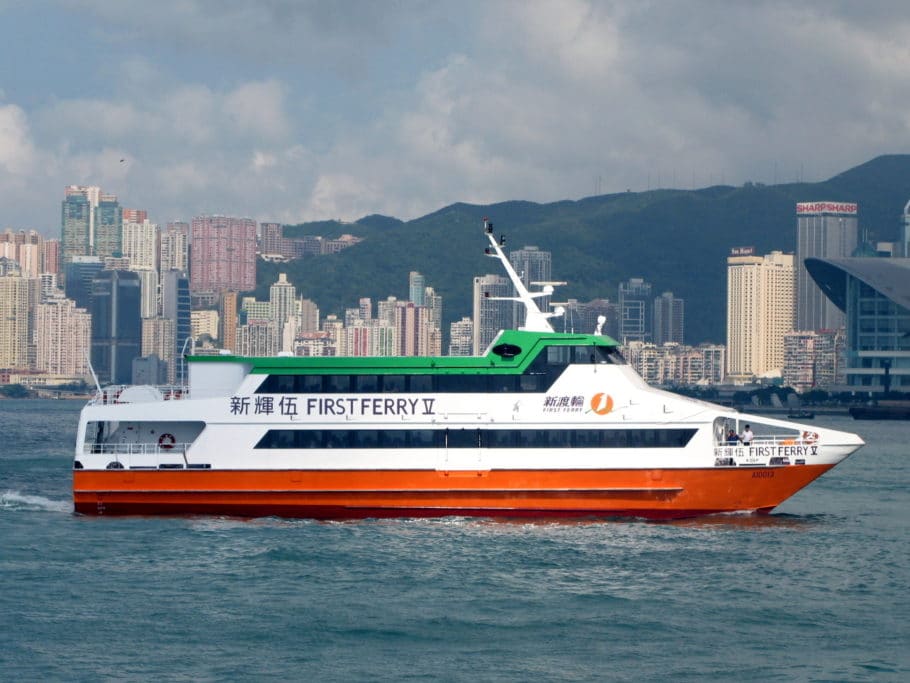 If you come during the summer, it’s worth paying a little extra for the air conditioned part of a ferry if you happen to get on a slower ferry boat that has separate compartments. Most of the ferries seem to be wholly air conditioned these days. By the way, nobody says “air conditioner” in Hong Kong, they just say “aircon,” which makes me think of Nicholas Cage for some reason, but never mind.

7. Hauling stuff. Everything changes if you need to get something besides your own body somewhere. In the US, if you wanted to buy a new laser printer for your home you’d order it on Amazon Prime and it would show up on your doorstep two days later via free shipping. That doesn’t exist in Hong Kong…yet. Here, you go to the Computer Centre in Wanchai or the other one on the Kowloon side and you by the printer, and then you’re stuck standing there with this huge, heavy box, like an idiot. If you live on Hong Kong Island or Kowloon, no biggie, just get a taxi to your door. If you live on an island, well, you’re in for some fun. Let’s just say when this happened to me, it was a 5-hour ordeal that cost me a lot of money and resulted in a sore back and shoulder for a few days. I wish I would have bought one of those metal carts you see all over town. 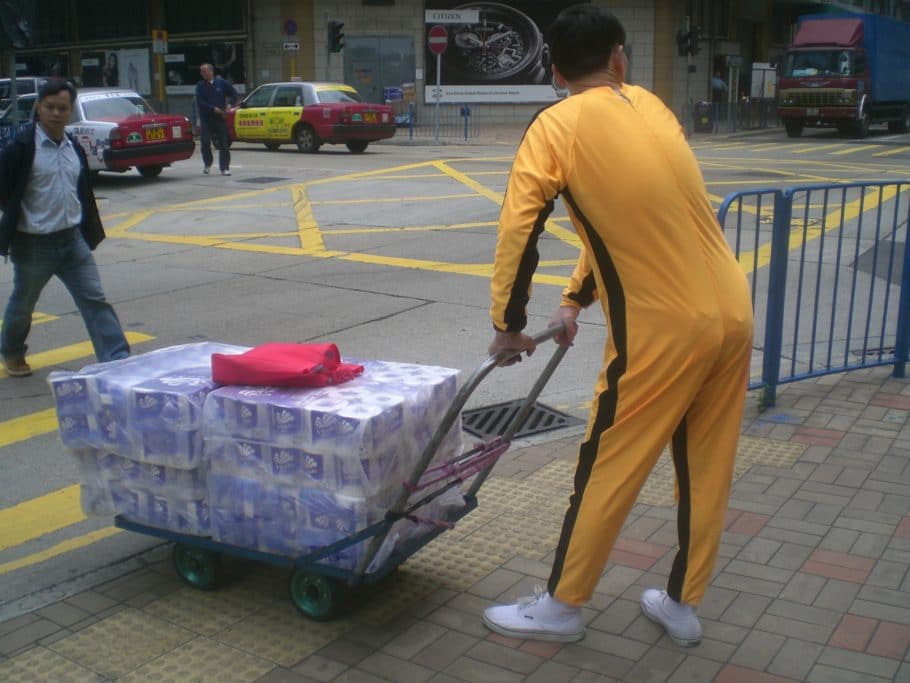 8. Star Ferry. The Star Ferry just crosses the harbor back and forth. It’s a very quick, cheap trip. Everyone should do it once in their lives, just for fun. For transportation, it makes sense if you’re already at the Central Ferry Pier and you need to cross over to Kowloon quickly to go somewhere near the water or to hop in a taxi. I’m split on whether or not it’s faster to take the Star Ferry across and then get on the MTR if you’re headed north on the MTR. It may be faster to backtrack to the MTR Central Station, but it’s hard to say. Anyone tested this out thoroughly? 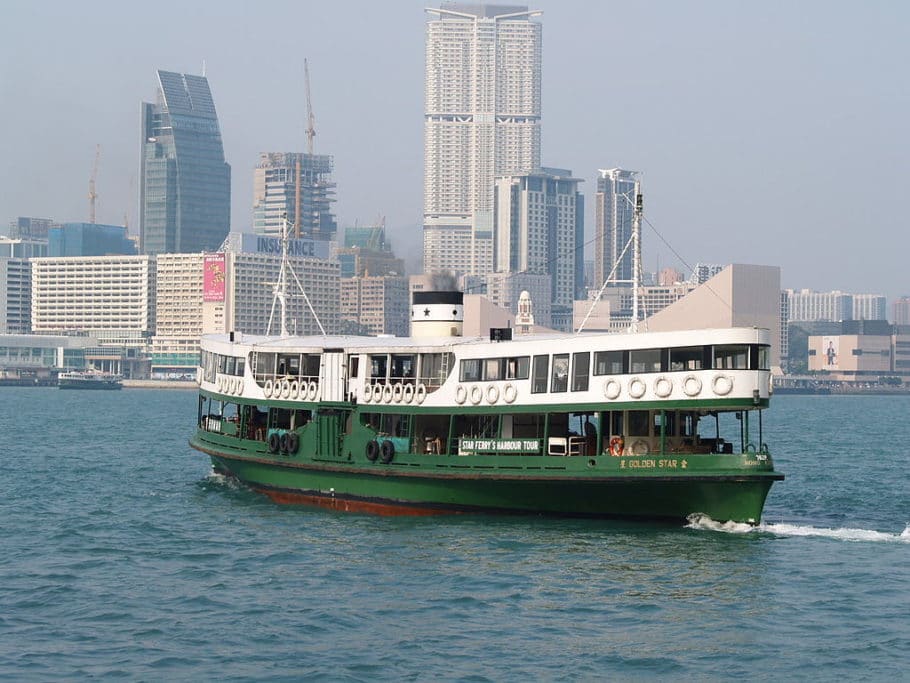 9. Mid-levels escalators. You’ve heard about Hong Kong’s famous covered super long escalator? It’s not a single long escalator, it’s a series of escalators in “Mid-Levels” which is sort of part of Central. You get on the first escalator, then get off, walk a few steps, get on another, and you can pretty much go that way until you reach the top of the city. It’s handy if you’re going from the lower part of Central to somewhere up higher, and near the escalators. Yes, the escalators show up on Google Maps. 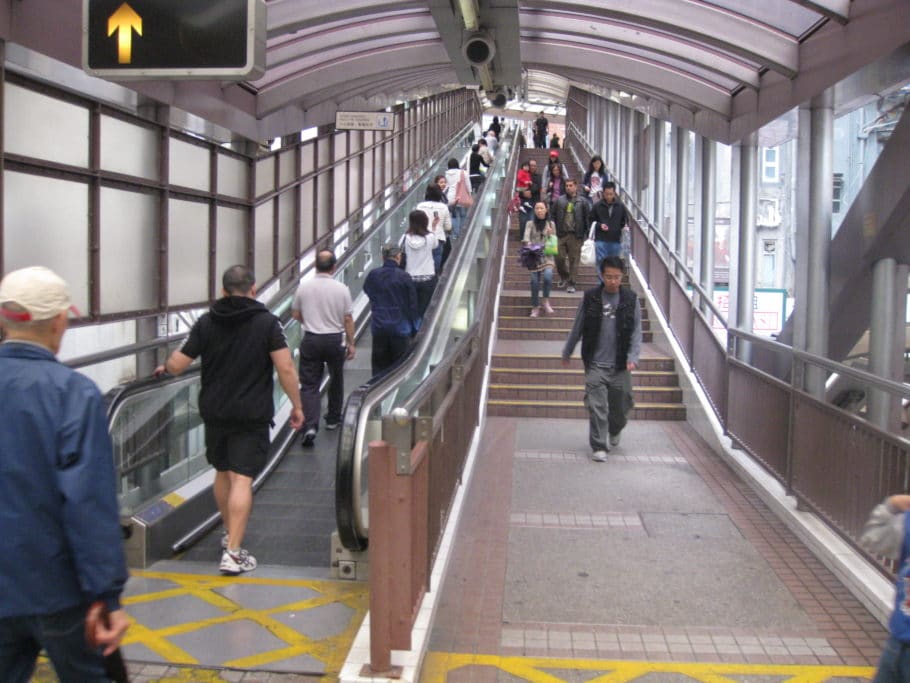 Just one problem. What goes up, must come down, but that means you, not the escalator, which is one way–up, except from 6 am to 10 am, when it goes down for the morning commute. Outside of those four morning hours you come down via stairs, as the photo shows. And if you ride all the way to the top you’ll be surprised how far it is to come back down. I’m petitioning the city to install a zip-line.

Anything I left out? Let me and others know in the comments below.

Good article….. but I feel you are I feel a little unfair about the buses… NW Citybus have a very good app, where you put in where you are (using GPS), and mark where you want to go on the map, and up come the routes, with distances to / from the stops…
May I also disagree with you on HK Taxi translator… ? Whilst it is a good idea, I can hardly ever find anything on it I want -try st paul’s hospital, or princess margaret hospital… or N lantau hospital…
But, good article – keep up the good work!

Good points. My perspective on the busses is a bit biased from my personal experiences, I’ll admit. Is this the NW Citybus app you’re referring to that you like?

I must be getting lucky with the translation app, it always has the places I’m looking for in it. Thankfully I haven’t needed to go to a hospital yet 🙂