In my humble opinion, part of the challenge Twitter faces when it comes to growing its user base is that it’s not drop dead easy to use. For most Twitter users, this produces a “Huh?” reaction because it’s easy for them. But “easy” is a relative term, and in the Internet world something isn’t compelling unless it’s drop dead easy, and Twitter fails that test. As a result, I see people making tiny, minor mistakes with Twitter that prevent them from being as effective as they could be. These tips are small things you can change about how you’re tweeting that will dramatically improve how many people see your tweets, click on them, heart them, and retweet them. To illustrate, I’m going to rewrite the following tweet to follow Twitter tweeting best practices. Let’s start by analyzing this tweet, pointing out how it can be improved, and then I’ll show you the improved tweet.

There are five primary improvements I see that we can make to help the content in this tweet reach a wider audience and get more engagement.

Gary Vaynerchuk says this is the #1 mistake people make on Twitter. When you begin a tweet with @, as above, it’s like you’re sending a message to that Twitter handle or username, or responding directly to someone. That means Twitter hides the tweet and it’s not visible publicly. In this case, the tweet came from @StartupGrindHK, and is going to @StartupGrindHK. Who can see this tweet? I’m not exactly sure, I think it creates some sort of eternal loop in the space time continuum. Because Derek Andersen and I were both tagged in the tweet, we got notifications about it, but I’m not sure who else can see it. The point is, it’s not visible to everyone, and we want it to be visible to everyone. Solution? First off, don’t include your own handle/username in a tweet. You don’t need to tweet to yourself. Second, if you want to start your tweet off with @, as in “@StartupGrindHK event coming up everyone, it’s going to be awesome!”, then put a period before it, like this “.@StartupGrindHK event coming up everyone, it’s going to be awesome!” That will make the tweet visible to everyone.

In this tweet, it references Derek Andersen who is the founder of Startup Grind. But it says “(founder of Startup Grind)” when it could say “(founder of @StartupGrind)” instead. Doing the latter produces a few benefits. First, it sends a notification to @StartupGrind that you tweeted, and then they can heart and retweet your tweet. Retweeting is good, you pretty much want all the retweets you can get, because that’s how other people will discover you, you get more followers, etc.

Startup Grind HK is in Hong Kong, but let’s say that someone goes into Twitter and does a search for “startups in Hong Kong.” Will this tweet show up? No, it won’t, even though it’s very much relevant to someone interested in the startup scene in Hong Kong. To fix this, add the hashtags #HongKong and #startup.

Because tweets are limited to 140 characters (and personally I hope they stay that way) every single one is valuable. Don’t use up a space unless you have to. Consider dropping every word you can, while still getting your message across. That often means abbreviating things. For example, is it necessary to say that Derek was the speaker in the above tweet? Or can we say that the event happened “with” Derek since “with” takes up fewer spaces than “Speaker:”? And if we can use “with” why not just go to “w/” which uses half the characters of “with”? Waste not, want not. Those are my top 5 tips for formatting your tweets. If you want more, Twitter has a downloadable PDF from 2014 with some of their own recommended best practices. It could use a little bit of an update, but still contains good tips. One part that is good for beginner’s is looking at the various “tweet templates” they have, like this one: 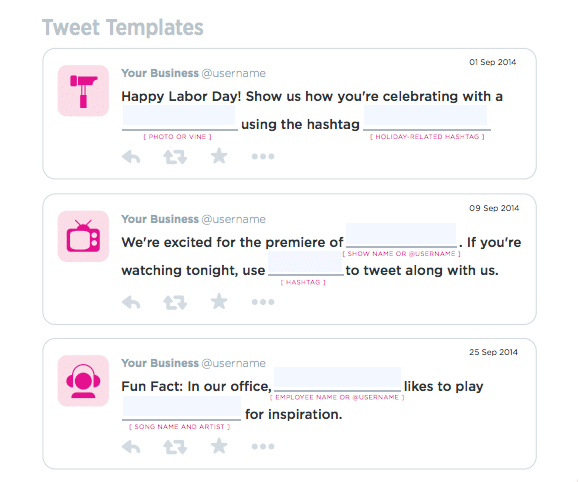 Or if I wanted to include an image, I would need to do a shorter tweet, like this:

These tips are easy to implement in your tweets, and will have a significant impact on how well your tweets perform. An easy way to see how effective your tweets are is to use Buffer’s analytics tab, which shows you stats like how many retweets each tweet got, how many hearts/likes, clicks, etc., like this:

Note: No, I don’t work for Buffer, I just love using it which is why I’m always talking about it in my posts.

Hope this helps you with your tweeting! If you have other tips for beginners when it comes to composing and formatting tweets, let us know in the comments below.