I enjoy performing experiments, even at great cost to myself. This is why I figure I’m destined for academia and research. I see a situation and think “What would happen if I…” and then I think “Well, XYZ could happen, and that could be a mess.” And then I think “Ah, you only live once, why not?”

The other day I found myself in just this situation as I held my increasingly dysfunctional Galaxy S3 and stared at Twitter. I had just clicked on the button to add people, the app had asked me if I wanted to import my contacts to see which of them were on Twitter, and I figured sure, why not? After the import, this is the screen I saw: 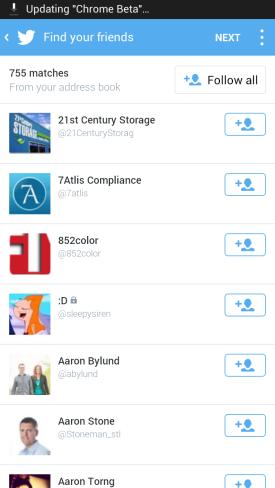 I stared at this and thought, “What if…I clicked on that ‘Follow all’ button?” Hmm, following 755 people, all at once. Do I want to follow all these people and/or company accounts? Not particularly. Didn’t I just spent considerable time a few months ago unfollowing everyone, then refollowing people I really wanted to follow? Yeah. Wouldn’t this be a step in the wrong direction, then? Maybe. But it’s for science, right? Before I could debate the matter more, I clicked the button.

That was on the morning of May 8th, at least it was the morning in the US (I’m in Hong Kong). Here’s what happened next:

Then I took a break from analyzing things to give it some time and went back to behavior as usual. I later checked the stats again to see where things are at and here’s what I found:

As you can see, there was a fairly consistent pattern of growth prior to my clicking that “follow all” button. On May 8th there was a jump, and then the pattern went back to normal again. The jump a few days later was an unrelated event. The jump in followers on the 8th was 46. Given the normal patter we can discount that to 40, and then given the 755 people I followed, calculate that my “return” is about 5.3%. In other words, if you want to increase your followers immediately by something around 5.3%, click that “follow all” button.

Granted, this is a rather unscientific experiment based on a sample size of 1. I would be interested to know what the results would be if we had a few thousand people do the same thing. Have you ever clicked the follow all button? What results did you see?