Which Networks and Why

In this post I’ll focus on the top three networks; Linkedin, Facebook, and Twitter. I also use Instagram, Snapchat, Pinterest, and others, but I don’t view them as basic necessities. If you’re not active on Snapchat, it’s unlikely anyone is going to call you out on that unless you’re putting yourself out there as an uber-expert on all things social. But with the aforementioned three networks, if you’re not active on those it’s a glaring hole in your resume no matter who you are.

What You Need to Get Started

Other than the information you can type in, the one big thing you’re going to need is a good photo. So much of how others judge you online comes from this one thing. It should be authentic. If it looks staged in a fake way, it will do more damage than good. I prefer “action” shots that aren’t portraits. The only reason I don’t use one myself is I don’t have a good one yet.

Your photo should look like you. If you’ve lost (or gained) a lot of weight, changed your hairstyle, or aged a bunch, take a new photo. Don’t dress completely differently in your photo than you do in real life. You want people, upon meeting you in person, to instantly recognize you, rather than saying “Wow, I never would have recognized you from your photo!”

Here are some examples of action shots and portraits that are great for social media profiles. 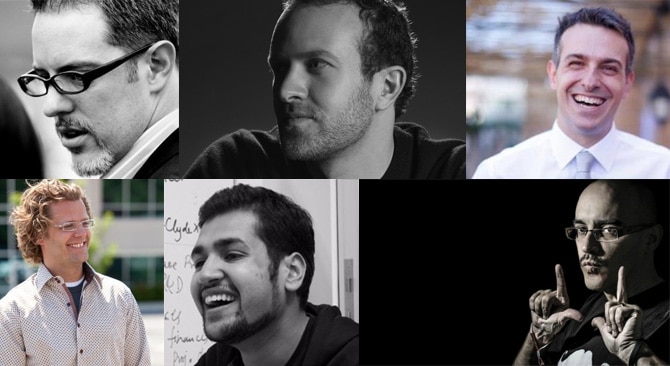 Tangent: Why didn’t I choose any photos of females? Because no good ones happened to come up during the 2 minutes I spent looking for good Linkedin photos. Sorry!

Now that you’ve got your photo, let’s dive into each network.

Avoid self flattery and self aggrandizement. Don’t use words like “visionary,” “progressive,” “forward thinking,” or “successful.” If you have to say it, it makes me doubt its validity. Heck, if you’re going to say “visionary” why stop there? Go ahead and say “Imbued with magical powers to control business events for the benefit of my employer.” It’s just as believable.

Titles don’t matter. What matters? Results. Focus on what you’ve achieved. If that’s hard, talk about roles. I don’t care that you were the VP Marketing at such and such company, but I do care that you built and managed a team of 5. I care even more that you built social media followings, email lists, and implemented marketing automation tools and can show how you increased lead generation by 400% and revenues by 40%.

Some other basics to cover:

Note: Yes, there’s a lot more you can do on your profile. I’m not covering anything, just some of the things a lot of people seem to miss.

If you’re not planning on promoting yourself as a public speaker, author, or other public figure, just use your normal Facebook profile. Otherwise, set up a Facebook page for yourself, like this.

I’ve set up a separate Facebook page because I’ve put myself out there as a speaker and writer. The people who are interested in what I speak and write about on marketing and entrepreneurship don’t want to know about what I think about politics, my kids, cats, etc. Well, maybe some of them, but not most of them. So I’ve segmented my personal and business audiences.

Share something at least once a day, but not more than a few times a day, or people will get overloaded and unfriend you. Share content you think your audience will find helpful. Ask questions. Engage in conversation.

What’s the fastest way to get followers? By following others. Many people follow back. Follow your friends and family. Follow people in your community. Follow people who have similar interests. Follow your heroes. That’s enough to get you started. That’s how I’ve added 5,000 followers over the past two years, without having to buy any.

What’s the best way to share content? I love Buffer, personally. Don’t just share links. When you want to share an article, right click on an image in the article, buffer the image along with the article link. Tweets with images get higher engagement.

Focus your tweets. I mostly tweet about marketing, entrepreneurship, and customer service. Very rarely do I tweet anything personal–that’s not how I built my following, so I know that’s not why people are following me.

And that’s social media 101, the super duper basic version. And yet sooooo many people aren’t doing these basics. What would you add? What questions do you have? Tell me in the comments below.

I must have run into your blog before, but it’s only now that I’ve spent considerable time reading your posts. This one, in particular, made a , since I’d been going in circles before I figured out how to set up my social profiles.

I too have separated my personal stuff from my business. Heck, I even use a pen name to write online, so as to keep it safe even more. Lately, I’ve been into photography and I find myself sharing a bit more personal moments, but nothing to keep me awake in the night. You – correctly – mention that your followers wouldn’t be interested in non-related business aspects of your life. Yet, I found this in your Twitter feed while randomly scanning your profile.

I also noticed you are using Instagram, which doesn’t much relate to writing and entrepreneurship.

So, doesn’t this contradict the point made in the article above? I see you sharing photos of cats in your Twitter and you update Instagram with photos from hiking.

I’ve recently begun using Instagram myself in a similar way. We are humans after all, living the life. I have launched multiple blogs for my different hobbies, yet I recently decided to be more active online as a person, than a blog. I suppose we must first decide on one thing: are we going to promote ourselves (so, we land writing jobs for example) or our blog/niche?

Nonetheless, that’s a great post and I’ll be sharing with friends as an introduction to social media – the correct way!

1. I don’t practice 100% separation between my accounts. I post quite a bit of business stuff to my personal accounts, and occasionally something personal to my business accounts. I think it’s important to make sure business accounts don’t become too personal or too impersonal. I like to get some personal insights into the lives of the business accounts I follow. But if they’re constantly posting about politics, religion, or their latest crusade, it’s just not what I’m looking for in that forum.

2. With some of my accounts, such as Instagram, I do have two accounts there but the division isn’t personal/business, it’s private/public. In my private account I share photos of my kids and use their names. Everything else goes in the public account, whether it’s personal or business. And frankly, I haven’t use my Instagram account for much in the way of business. I would say it’s 90% personal.

Good to hear we’re on the same boat. Makes me more confident of how I’ve set up my social networks.

Thanks for the prompt answer Josh, will keep an eye on the blog and your shares. Take care!

Great post! Another thing I’ve noticed hurts response is for those who have half as many followers, as people they are following. I’ve not ever tried to build my twitter account, but I noticed on Instagram that every 10 or so people I follow, I only get about 4 who follow me back. Do you ever go in and unfollow people, what do you do to prevent such a large ration of followers to “followings”?

Here is some interesting reading on Twitter follower to following ratios http://www.digiwriteit.com/blog/twitter-followers-following-ratio/.

Yes, I sometimes “prune” my list. I use http://tweepi.com/ to do this for bulk unfollowing. I unfollow people who aren’t active (those who haven’t posted for 60+ days). I also tend to get a sense for those I’m following who just have automated posting going on. If they’re never posting like a human being and it appears they’re just posting automated spam then I’ll unfollow them as well. But neither of these methods ends up cleaning up a lot of followers, just a few here and there.

The better strategy, if you care about your ratio, is to focus on developing a following. I think this post from Buffer https://blog.bufferapp.com/twitter-tips-for-beginners is one of the better ones for getting started out right.