Last week I wrote about an experiment I tried, posting lots of articles on Twitter to see if it resulted in new followers. The results of the experiment showed that at least in my case, it had little to no effect. So I did what all good researchers do, I doubled down. Instead of just posting a bunch of links to articles, I posted a TON of links to articles. I use Buffer and FollowerWonk to schedule my tweets for maximum effect, but to virtually no effect in this case. Here are the stats from TwitterCounter (which strangely appears to be blocked in China, apparently because it has “twitter” in its domain). 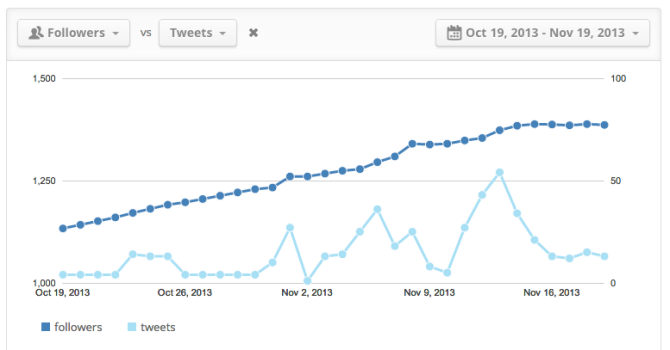 While it does appear that on the day I tweeted 54 times there is a slight bump, it’s not much more than the general trend.

A few things I learned from this:

1. It’s really hard to tweet 24 times a day. At least it’s hard to tweet 24 articles. Sure, if they were just any old articles it would be easy, but I was trying to tweet good stuff, not junk, which meant I had to sift through a lot of junk to find what was worth reading. I didn’t read every article, I can tell you that. I didn’t even read most of them. I didn’t have time to. I basically tweeted the articles I would have liked to have read.

2. People don’t seem to care much about you just tweeting articles. Ok, they don’t care about me tweeting articles. An interesting future experiment would be to add personal comments to every tweet of an article and see if engagement is higher.

3. There are more articles I’m interested in reading than there is time to read articles.

Again, this is just for fun. It’s not very scientific, but it’s interesting to me. It will be somewhat more interesting if I can find something that works in a big way to attract more followers. But mostly in a fun sense of the word “interesting.” More followers isn’t my primary goal, but rather more socialization and learning. But the experimentation is fun. My next experiment is to cut back on the article sharing and focus on favoriting the tweets of others. I’ll try that out for the next week and see what happens. Then retweeting, then quoting, etc. Sign up for the email from this blog if you want to be informed when the results are posted.

24 tweets a day is a lot, I agree,that is if you really take time to think what to post. (Quality rather than quantity, is it applicable to Twitter?) I’m impressed by @brainpickings, Maria Popova posts more than 50 tweets a day, well annotated links to her own content.

Our firm is experimenting with article sharing where we download the featured image, share the image, and then reference the article. We are hoping the extra real estate images take up in the feed and the visual aspect might attract more clicks, favs, shares, followers, etc.

Still early to tell if it’s making a difference.