Roughly a week ago I began a fairly unscientific experiment–to find out if sharing a bunch of articles on a regular basis would get me more Twitter followers. I used Buffer to schedule tweets, and Feedly to scan articles worthy of sharing. Since Buffer and Feedly are integrated this minimized the time I had to spend sharing articles. I scheduled tweets to be published about 10 times each day, and then I let ‘er rip. Then I used TwitterCounter to track the results. Here are the results: 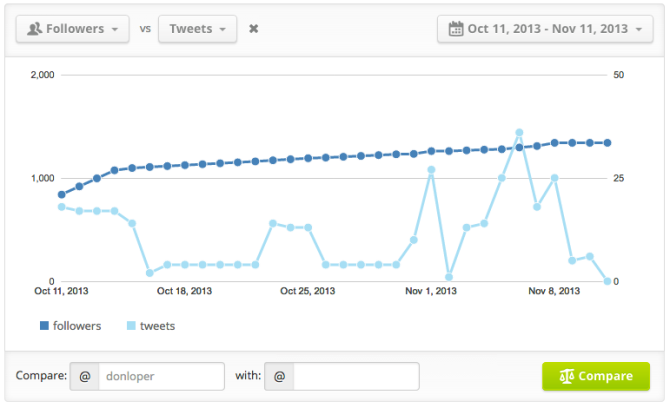 My conclusion? At least for me, just sharing a bunch of stuff, even if it is stuff I like and think is interesting, doesn’t give me any more followers. It doesn’t appear to give me any fewer followers either. The growth seems to be rather consistent, almost regardless of what I do. Anecdotally, where I have seen increases in the past is when I engage in real interaction with other users. You know, using Twitter to “talk” to people. So whereas sharing a bunch of articles via Buffer might not work so well for me, sharing the articles and then engaging those few who are interested in those articles works better. Buffer/Twitter help me to start conversations, but they don’t take my place in the conversation.

I’m still figuring out what Twitter is good for. I know that I have found useful content there. I have had some valuable discussions. It helps me stay abreast of what is going on in my industry (online marketing). I hope some of what I share is helpful to others. But I’ve only been using Twitter in any substantive way for a few months, so the jury’s still out.

I will continue to post articles on Twitter, and in fact I’m increasing my Buffer to post 24x per day. Not because I think I know what’s good for everyone else, but in part because like Bill Fischer over at Forbes, I’m a bit of a selfish tweeter. Twitter is not only where I share things I find interesting and valuable, nor where I find the same, but it’s also where I save content. It’s a sort of personal diary. I would post to Twitter even if I had no followers.

I’m also increasing the posts to 24x per day in the interest of more science. For the past week I’ve set my Buffer to only post during daylight hours in the US. But I’m in Hong Kong and have some followers here, as well as in other parts of the world. I used FollowerWonk to set my Buffer schedule for maximum effect, and opened it wide to see what it recommends, and now I want to see how that works out. If it results in more followers that’s nothing I’ll complain about, but mostly I’m just curious.

How have you used Twitter, Buffer, TwitterCounter, or FollowerWonk? What have you found that works? What doesn’t work?