You have a website. You’ve just published a new page on it. How long will it be until Google knows the new page exists and ranks it in its search results? Here is one example to show how fast it can happen, and since it deals with a well known, highly trafficked site cannot be generalized. This is also not a post on how to get your site’s pages indexed faster. If you’re interested in how to get your site’s pages indexed faster, check out Kristi Hines’ post at KISSMetrics.

Today I created a new post on Forbes about social media for anti-social CEOs. It was created at 11:49 PM EST, which is 11:49 AM where I am in Hong Kong. The other times shown in this post are local time for me in Hong Kong.

I have a Google Alert set up for my name, so I receive an email immediately whenever Google indexes new content with my name in it. This is one of the times when it’s handy to have the last name “Steimle” rather than “Smith” or “Brown.” I received a Google Alert email at 12:28 PM Hong Kong time, or 39 minutes after the content was posted on the Forbes website.

But indexing is one thing, and ranking is another. Or is it? 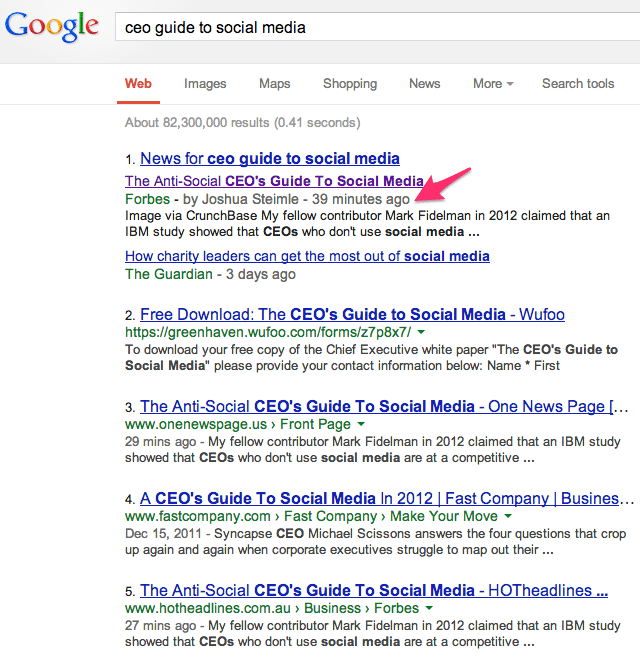 Not only was the content indexed within 39 minutes, but it also ranked #1 in a search for “ceo guide to social media” within the exact same time period. Granted, that ranking may not hold over time, but for the time being it’s interesting, and awesome.

I also thought it was of interest that not only did the Forbes site rank that quickly, but results #3 and #6 are syndicated versions of the same article. They appear to have been indexed about 10 minutes after the original was.

How fast will Google index and rank new content on your website? I don’t know. But I do know it can happen in as little as 39 minutes.

I think indexing and ranking a new page has a lot to do with
other factors as well like the reputation of the website, how much social shared
it is and more. New post on my blog usually got indexed within an hour if the post
got some shares on social media (more importantly G+).

I think it also has to do with how frequent the website got
updated and as Forbes get update multiple times a day so I think their crawling
and indexing ratio will be higher than most blogs available on the internet.

Hey, all you need to do is share it on G+ and it’s indexed within a minute 🙂

Hi Joshua, I think it has a lot to do with the Domain Authority. Also, I just wrote something similar to this on Search Engine Watch. It’s possible they used the method I describe. You might find this interesting.