A few weeks ago I noticed an interesting phenomenon with my Twitter notifications. Each time I posted an article on Forbes, it would instantly be retweeted by a lot of people, and by a lot I mean at least 50, sometimes more than 100. Most of this Twitter sharing of my Forbes articles (and yes, it is limited to Forbes–the same thing doesn’t happen when I’m published on Entrepreneur, Mashable, or anywhere else) is being done by bots. These are fake accounts set up and programmatically made to tweet anything I post to Forbes. I assume the same thing is happening to many, if not all, other Forbes contributors. Great, right? I wish.

The problem is these fake accounts clutter up my Twitter notifications, which prevents me from being able to see the legitimate tweets from real people. I like to favorite, retweet, and occasionally follow those people. But I don’t want to favorite, retweet, or follow a bot. And if my article is retweeted 100 times, 80% of the time by bots, it takes a lot of extra time for me to find the 20 legit tweeters.

This post isn’t about fixing the problem–Twitter better fix it, or they’re going to see less user engagement. This post is about how to quickly identify spam, and more importantly, make sure you never get mistaken as a spammer. You don’t want to be mistaken as a spammer because Twitter allows users to report spam accounts, which I do frequently as a matter of civic duty, and to block them from clogging up my stream. 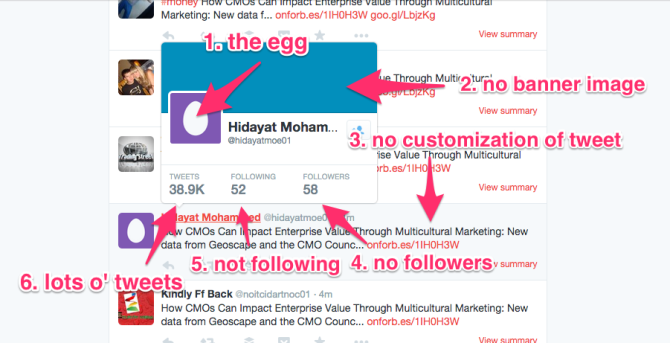