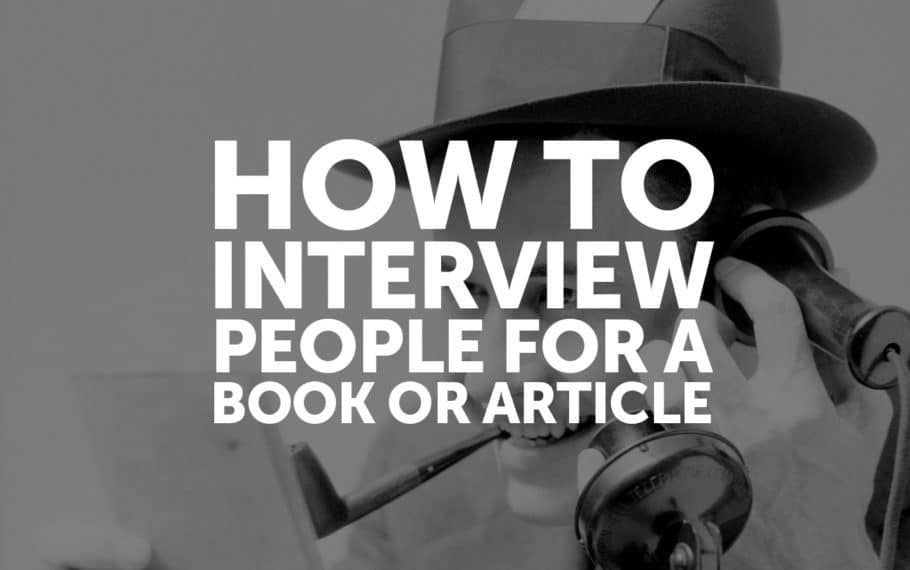 Interviews add value to your book, blog post, or article because the quotes taken from these interviews spark interest and add credibility. If you want to become an influencer one of the best things you can do is interview lots of other influencers in your field of interest. I interviewed 30 top CMOs for my book Chief Marketing Officers at Work from companies like GE, Target, PayPal, The Home Depot, and Spotify. In fact, my entire book is simply those interviews, without any commentary. It provides a fly-on-the-wall perspective into the careers of these top marketers.

How I Got Famous Executives to Agree to Be Interviewed

At the time I started working on my book I was already writing extensively for Forbes and had interviewed other notable business figures like Clayton Christensen, Tim Draper, and Doug Richard. I had also formed relationships with people who had connections to some of the people I wanted to interview for my CMO book. Not that I had formed these relationships on purpose, with the intent to someday interview their connections for a CMO book, because I didn’t know I was going to write a CMO book at the time these relationships were formed, but that’s part of why it’s good to develop lots of relationships–you never know where they’ll lead.

One of the first people I pitched to be in my book was Seth Farbman, CMO of Spotify and former CMO for The Gap. I pitched him through Sunita Kaur, the managing director of Spotify’s Asia operations, who I had interviewed when I was the director for Startup Grind in Hong Kong, and also featured in a Forbes article. Sunita made the introduction, and because Seth trusted her, I got the interview. However, this is not how I got most of my interviewees to agree to be in my book.

Most of the CMOs in my book came through cold pitches. When I wanted to get the CMO of the Harvard Business School (yes, HBS has a CMO!), Brian Kenny, to be in my book, I simply guessed at his email address and sent him an email. At that point I hadn’t interviewed anyone else, so he took a risk on me, which I’ll be forever grateful for. Sometimes you just get lucky that way. I was able to play up my experience writing for Forbes and other publications, and the fact I already had a publisher, but that’s all I had going for me.

Believe it or not, the best tool I had for securing interviews was LinkedIn InMails. If they ever want a testimonial, here it is–through LinkedIn InMail I was able to secure at least half of the 30 interviews I performed for my book, including some of the big names from big companies. It was amazing to me to try and email these people, call the corporate headquarters, and meet with dead ends at every turn, and then send an InMail directly to the person and get a response. I’m still shocked at how well it worked.

After I got the first few interviewees, then I was able to leverage their names in my pitch, which went exactly like this (this is copied and pasted from emails and InMails I sent):

Hi [prospective interviewee], I’m a contributor to Forbes, Mashable, TechCrunch, and other publications, and I’m working with the publisher Apress on the book Chief Marketing Officers at Work (August, 2016). I’ve already interviewed CMOs from companies like Spotify, Audible, and the Harvard Business School, with more interviews in the works, and I would love to have your input as well. Interviews are conducted over the phone and last 60 minutes. I’ll also be in the Bay Area and Los Angeles soon to conduct interviews in person if preferred.

This was the pitch I used at the beginning, when I only had three CMOs confirmed. As I got more confirmed and did more interviews, I leveraged those names and companies to get more and more.

One more trick I used to get a few key interviews was instead of reaching out directly to the interviewee or his or her employer, I reached out to the employer’s PR firm and pitched them on the fact that if they were able to get their client’s CMO to participate, this would be a big win for them. It was great to see them scramble and do the work of securing interviews for me, and then take the credit, which I was more than happy for them to get. Win-win!

With regards to doing the interviews themselves, here are a few of the lessons I learned.

Then, when I get on the phone with the interviewee, I go over the process again, like this:

Hi [interviewee], thank you so much for taking the time to speak with me for this book.

Although 60 minutes seems like a long time to talk, to make sure we don’t get caught short at the end I’d like to dive in as quickly as possible, is that ok? [I say this to respect their time and give them an easy way to get out of feeling like they need to engage in chit chat to be polite]

Now, having said that, I don’t want you to feel rushed in your answers. Take as much time to answer as you feel you need. If you say something and want to clarify it later, please feel free to do so. While we want this to be published as an authentic view into the role of the CMO, we can edit this as need be. And since you’ll have a chance to review the transcript prior to final editing and publishing, I hope you’ll be able to feel relaxed as you give your answers.

Do you have any questions before we begin?

Great. First, I’m going to ask questions that focus specifically on you and [respective company]. Then I have a second set of questions that are more generally related to the CMO role.

And while I’m familiar with [respective company], and I have done some research on you, just assume I know nothing since that’s where at least some readers will be coming from.

I couldn’t track the status of each of 30 interviews without a system for organizing it all. That system is a simple spreadsheet. In it I have status markers for each to-do item, so at a glance I can see whether the interview has been scheduled yet and if so, when, if it’s in the hands of the transcriber, if it’s being edited, if I’ve received the publicity release form from the interviewee, etc.

As the interviewer it’s your job to make sure the interview is a good one. The person being interviewed is doing you a favor. They’re giving you their time and valuable content. If you end up with a bad interview it’s your fault because you largely control the circumstances. I use a system of organization and preparation that makes it easy for the interviewee to perform well with minimum effort.

This is what I’ve learned from performing the interviews for this book. Do you have any lessons to share based on your experience conducting interviews? Any follow up questions?

Hi Josh, great, informative post. Thanks for sharing your tips. Have you posted anything specifically on the publicity release you have your interviewees sign? Mackenzie Wilson http://www.mackenzie-wilson.com

Very good, Josh, and quite timely. I’ve been trying to interview a particular person for a book I’ve written (just need some good quotes and a couple insights from key persons) but having a check of a time breaking through red tape designed to be interference. Any suggestions? These are interviews of C-level executives in the medical industry.

One way I was able to get through to particularly well-guarded executives was to contact their company’s PR firm and pitch them. It’s their job to look for opportunities for publicity, so when I called them up and said “Hey, if your CMO is in this book it’s going to be great for your client and a big win for your firm,” then they got to work and made things happen I never could have done on my own.

Hi Josh–is it common practice to compensate interviewees for your time? Related, is it a problem to potentially earn money for your book but ask that interviewees provide you time (and information) for free? How does that whole process work?

No, it’s not common practice to compensate interviewees, exactly the opposite. Interviewees are “compensated” because of the exposure they get from being part of an article or book. It may be different for broadcast TV news, where the person has to fly in to be at a studio.

Josh, this process is scary for so many. Thank you for outlining a simple process for them to follow.

This was really helpful Josh – just about to start my interview process so delighted to stumble upon this – bravo from http://www.clarejoneslondon.com 🙂

Thank you – this is super helpful for newbies like me. I hadn’t heard of Switch or UberConference before. For those of us who are testing the waters and don’t want to spend yet, are there good programs you might recommend for recording calls for free?

For Skype there is Call Recorder, but it’s not free. But it’s a one-time fee, and is fairly inexpensive. You can also do up to 40 minute calls with Zoom and record them. But I really love using UberConference and Dialpad (formerly Switch).

Hi Josh. Thanks for this informative article. Could you please share some of the questions that are a must ask for core content? thank you

Hi I’d like to make a book about PTSD