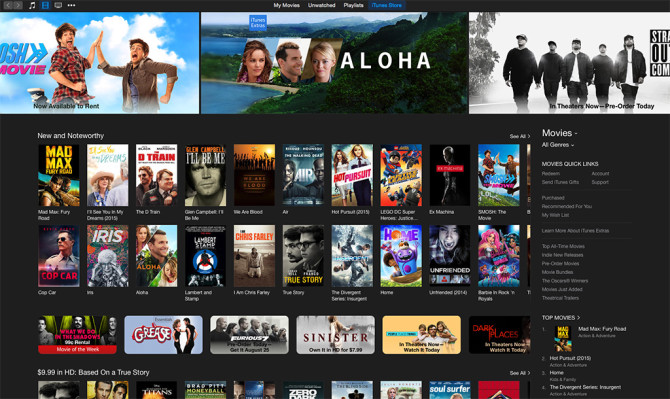 Apple could sell me a lot more movies with a simple change to their iTunes store. A LOT more movies. But first, some background on why I watch movies through Apple/iTunes at all.

1. Streaming doesn’t work so well for me. I live in Hong Kong in a somewhat rural area. Yes, Hong Kong supposedly has some of the fastest interwebs speeds around at 100 mbps for around $35/month USD, but that’s downtown. If you live 30 minutes outside downtown, you get 6 mbps DSL for the same price. That’s it. There is only one provider, PCCW, and they have one package. You can get a mobile data package and use that, but that costs twice as much per month and limits you to around 20 GB so I don’t use it for downloading movies. With iTunes I start the download well ahead of time so I can get the file and watch it without constant buffering.

2. I don’t like Netflix. I know people use it in droves, but every single time I’ve tried it my experience has been; a) sign up, b) look for the title I want, c) find out Netflix doesn’t have it, d) cancel my account. If I’m going to bother paying for a subscription service, it better have everything I want to watch. Netflix tends to miss 9 times out of 10. I guess I don’t like watching what everyone else likes to watch.

3. Amazon Prime? Same as Netflix. I’m actually a subscriber to Amazon Prime, even though I live overseas. That’s because I use it for business purchases. Every once in a while I’ll try it out for watching a movie, because it does have a larger selection, but I still have to deal with buffering (see #1) and it’s just a big pain. Plus I’m always disappointed with Prime because I would expect to get something for free since I’m paying for the service, but everything I want to watch I still have to pay for, and all the free stuff is stuff I don’t want to watch.

4. Quality. The movies I watch on iTunes are higher quality. I get the full HD experience with no buffering, no interruptions, no bother.

Most of the movies I watch I rent. Why do I rent rather than buy? Because in most cases I don’t know if I want to own the movie until I’ve watched it once. Buying a movie generally costs 4x the cost of renting. I know if I buy the movie I’ll watch it at least once, but will I watch it 3x more times? Am I willing to take the risk? In most cases the answer is no.

The Change Apple Should Make

Here’s where Apple could cash in. Whenever I rent a movie, right after I’m done watching the movie have a message pop up that says “Buy this movie right now and we’ll discount the price by the cost of your rental. This offer will expire in 24 hours.”

There have been so many times I’ve watched a movie on iTunes and at the end thought “Man, I wish I had bought that instead of renting it, because I totally want to watch it again.” But having rented it, I’m not about to now pay full price to buy the movie, like a chump. So I don’t buy it. And I never rent it again, because that would make me feel like a chump as well. Instead of earning $20 from me, Apple gets $5. They also miss out on the opportunity to build customer loyalty. If I knew I could watch rentals on iTunes, and then buy the movie if I really liked it, where would I rent all my movies in the future? iTunes, no doubt.

Am I the only one who would buy more movies if Apple made this simple change? I doubt it. I suspect there are tens of millions of dollars Apple is leaving on the table here.

Potential Problems With This Idea

Whenever I get a great idea like this I then think “These people aren’t idiots, they must have thought about this and they must have a good reason for not doing it. It’s probably not such a great idea.” Here are some potential problems with doing what I propose:

1. People would buy fewer movies. Some people who are buying movies might rent them instead, therefore cutting into Apple’s existing revenues.

Ok, I guess that’s it. I can’t think of any other reason why Apple wouldn’t do this. And it should be fairly easy to access data, either existing data or through some testing, to find out whether offering people the chance to buy discounted movies after renting would help or hurt Apple’s bottom line. Do you have any other ideas why Apple shouldn’t make this change?