On 10 April, 2014 I asked the question Do Frequent Blog Posts Really Grow Traffic? I answered the question with my 23 May post Yes, More Frequent Blogging Really Does Increase Traffic, after blogging consistently, three times per week, for a month and a half. Traffic increased by over 50% as a result of that experiment. After that experiment, I performed another, albeit not on purpose (I just got busy with other things). What would happen if I stopped blogging entirely, after having blogged consistently? Would my traffic return to what it was before I started the experiment, or something slightly higher? The real question being, does frequent blogging result in a permanent increase in traffic?

Answering the question of whether or not my traffic would drop if I stopped blogging was an easy one to answer. The answer is most definitely “yes.” 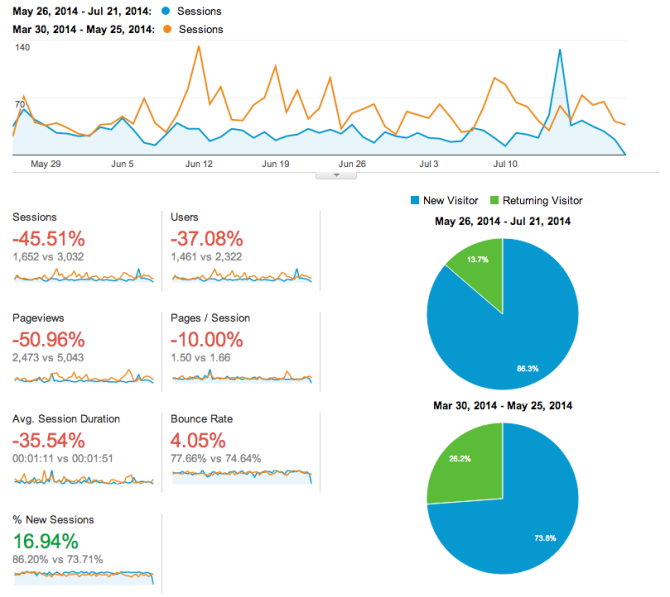 Traffic did indeed drop substantially when I stopped posting on this blog. But this only compares data from after my experiment wherein I was posting consistently to the period immediately after. How does my traffic post-experiment compare to traffic pre-experiment? The hard part was finding a 45 day period when I hadn’t blogged, and when sufficient time had passed to give me some semblance of scientificity. But being the patron of the sciences as I am, I pressed on, and found a period that I believed would fit my needs. 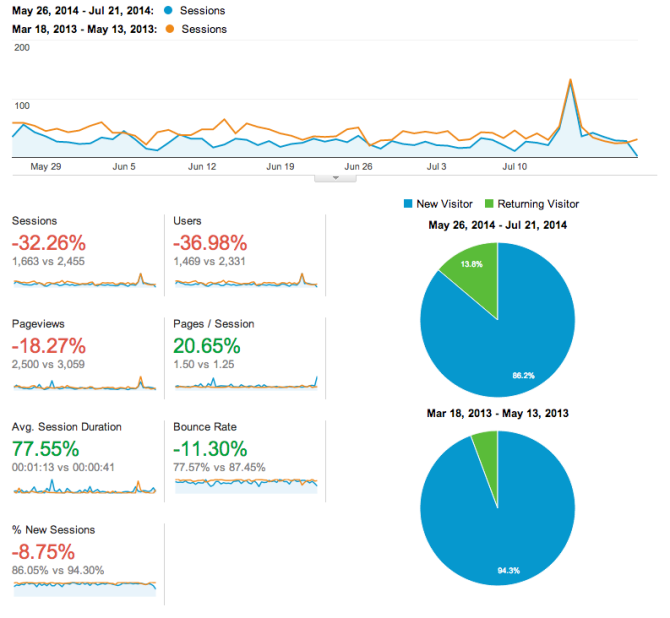 Unfortunately for me, the data still shows a negative trend. If I were truly in control of the variables and got these results, I would have to conclude that posting consistently, then not posting, not only means my traffic goes down, but gets worse than it was before. But I suspect this isn’t the issue, but rather that there were other variables at play during this time period that were boosting traffic to my site, despite my not posting during this time.

You might ask why I didn’t compare the period post-experiment to the period immediately pre-experiment. This is because while I wasn’t posting three times per week prior to start the experiment, I was still posting fairly consistently once or twice per week, whereas post-experiment I didn’t post at all. But since comparing to a prior period didn’t give any meaningful results, I looked at that pre-experiment period. But again, traffic post-experiment was down compared to this period in a substantial way (-30%).

That led me to once again look at traffic to my blog over the past several years.

Various animal-themed Google updates took major bites out of my traffic over the past few years, and while consistent blogging increased traffic, the increase was only temporary. Even with the increase, it was getting nowhere near to generating the traffic I had seen before. So what could I conclude from all this?

1. This is how blogging experiments fail. I cannot see a way to reliably answer my initial question, based on the data I have available to me on this blog.

2. Perhaps this blog is now where I should be focusing my attention. Now, if I had nowhere else to go, that would be one thing. But I have Forbes, Entrepreneur, and many other places where I could place the content I’ve created here.

Should I quite blogging here? Or press forward?

If you know me, you probably already know how I’ll answer that question.