In the latest installment of my Twitter experiments to follow on the heels of Does Sharing A Bunch Of Articles On Twitter Get You More Followers? and Does Sharing A Ton Of Articles On Twitter Get You More Followers?, I experimented to see if favoriting a lot of posts would gain me any extra followers. Each day I would scan through Twitter for 20-30 minutes and favorite any post I liked or that interested me. In many cases it was a way to mark something that I wanted to follow up on later, like a link to an interesting-sounding article. The results? 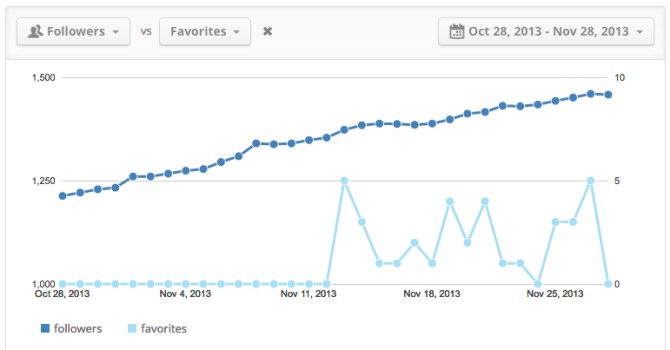 As you can see, there do appear to be small bumps when I was doing the most favoriting. It does seem to have some slight effect, at least. However, this experiment was more difficult than the others because I couldn’t “buffer” my favorites the way I could buffer tweets and retweets. When I favorited a tweet, it got favorited right then and there, and that meant my favorites came in spurts rather than spread out.

Once again, I’m not doing this so that I can figure out how to get the most followers and then ramp up my activity in that area. It’s just my curious nature to experiment in this way. My advice to anyone looking to take advantage of social media remains to simply use it to be social. Then good things will come.

What’s the next experiment? Mentions. This one is going to take a bit more work.

Great post Joshua! Our data shows that about 5% of people will follow you back if you favorite their Tweet and it is about a topic that is relevant to your profile. That number jumps up to around 27% if you favorite their Tweet and then follow them later. Of course, there are differences depending on the target audience and how established your profile is. Have you seen similar data on your end?

My experience was anything but rigorously scientific, but my anecdotally 5% seems to be about right. My combined experience is that being social generally is what grows one’s network on Twitter. I’ve found the times I get the most followers is when I attend an event and participate in hashtag discussions on Twitter. Then everyone involved ends up following each other.