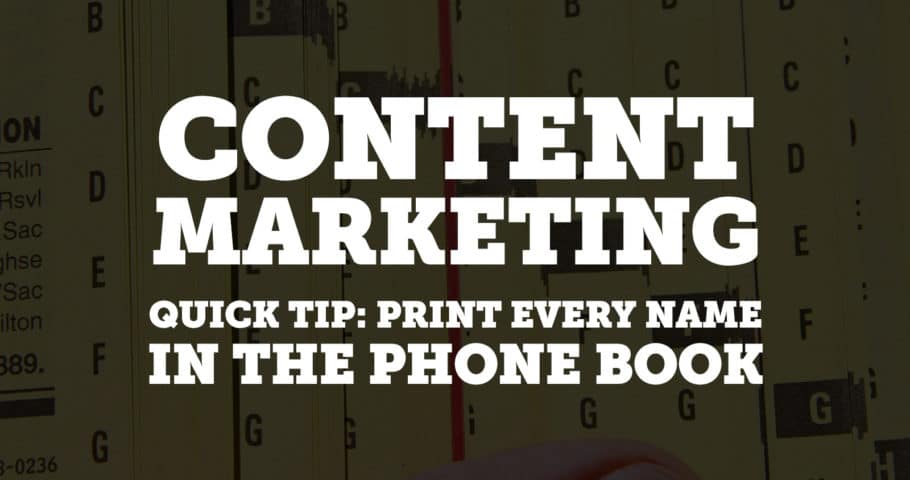 Want to get a mountain of people sharing your blog posts? Follow the advice of an old-time, local newspaper editor:

If I could, I would print every name in the phone book.

What this editor knew, and wanted to pass on to his writers, was that people love to see their names in print, and when they see themselves mentioned in an article or blog post they will share that content to tell everyone “Hey, look at me!”He wanted his writers to always include names–lots of names–in the articles they wrote. Dale Carnegie, author of the classic bestseller How to Win Friends and Influence People, put it this way:

A person’s name is to that person, the sweetest, most important sound in any language.

People want to feel important, and when you, as a content creator, mention someone by name in your blog post, you deliver that favor. The best part is that this is a free gift–it doesn’t cost you anything but a little time and effort, for which you are well paid when the recipient of your present shares the article with his social network.

Here’s how I applied this with my writing at Forbes: 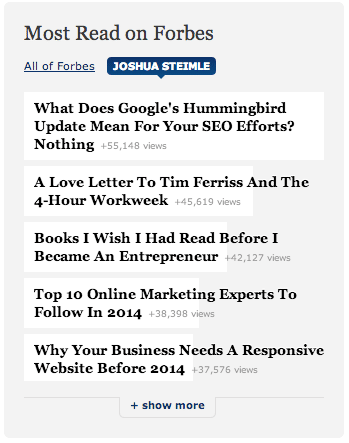 Posts #2 and #4 obviously leverage this tactic. Piggybacking off Tim Ferriss is nothing new. Everyone under the sun quotes him or references his work, and it’s not just because they like his book, The Four Hour Work Week, or his blog, but because they hope that by quoting Tim he’ll tweet their article or blog post and they’ll get thousands of readers. Does that mean I or these other writers are insincere? Not at all. Every word I wrote in that post is 100% sincere, otherwise it wouldn’t have worked. I only include individuals in my writing that I truly like and want to promote.

Even the list of books I posted to Forbes is still a way of citing people, since every book has an author associated with it. Do you think those authors I mentioned shared the book? Do you think I am now on their radar? You betcha.

Make a List, Check it Twice, Then Make it Longer

I have to confess I made a mistake with my post about top 10 online marketing experts to follow in 2014. I should have continued on to 50 like Haydn Shaughnessy did with his list of the top 50 most influential social media experts. That list has had 134K visitors vs. my 38K. What I can say is I learned my lesson and made sure I got 50 people into my Mashable piece The top 50 marketing influencers on Snapchat (that aren’t DJ Khaled). That article has been shared almost 11,000 times on social media.

How Will They Know?

Creating an article is the first step, but sharing it is perhaps even more important. After all, if someone writes a blog post on the internet and nobody knows, does it really exist? You could simply depend on the people you mention having a Google alert set up for their name so they know whenever someone posts about them (btw, if you’re an influencer and not doing this yet you should), but let’s not leave things to chance. Once you create a blog post make it easy for the people you quote and reference to share it. For example, here’s how I’m sharing my Mashable article on LinkedIn:

The great thing about LinkedIn is I can tag people I’m not connected to by typing in “@” followed by their name. When I post this to LinkedIn each of those people will receive a notification that I tagged them, and they’ll know based on what I wrote that they were included in this Mashable list. Even people as busy as Gary Vaynerchuk or Casey Neistat or Jay Baer is likely to take a look at a list on Mashable that includes their names. Then they’ll see that the article is written by me, that I’m the one who shared it with them, and suddenly my name is on their mind. Who knows where that might lead? But even if it doesn’t lead anywhere I’m still happy to do it, especially when I can include folks who aren’t so well known and give them a small boost.

Quote Are Good For Other Reasons

Every article can easily quote or reference people–it doesn’t have to be a list. I quoted Tim Ferriss in this blog post you’re reading, as well as Dale Carnegie (although I doubt he’ll be retweeting it…).

In addition, quotes are not just good for getting people to share your work, but because they make your writing better, and I’ll quote Brian Clark from Copyblogger to back me up:

A great quotation is gold to a perceptive writer. You can instantly boost reader engagement with the right bit of wisdom or wit. And when writing to persuade, you can bolster your arguments by pointing to the words of the well regarded.

See how suddenly what I’m saying seems more credible, simply because I quoted someone else? If you know who Brian Clark is than you feel even more credibility oozing from this post.

Final tip: It’s never too late to add names. Ok, sometimes it is–I can’t go back and modify my Forbes post from 2014. But guess what? When I first wrote the blog post you’re reading, it only included three names. Now it includes seven. In fact, this blog post has been heavily revised and improved since I first wrote it, following my own tip in this post to include more names as well as tips from my post Formatting Tips For Your First Blog Post. There’s another free content marketing tip–go back and revise old content to give it a new lease on life.

The next time you write a blog post or article try adding a few quotes (or a lot) from people, then post it on LinkedIn, Facebook, Twitter, etc. and tag them in it. See if you get more sharing on that post than others. I’m betting you will. Good luck!