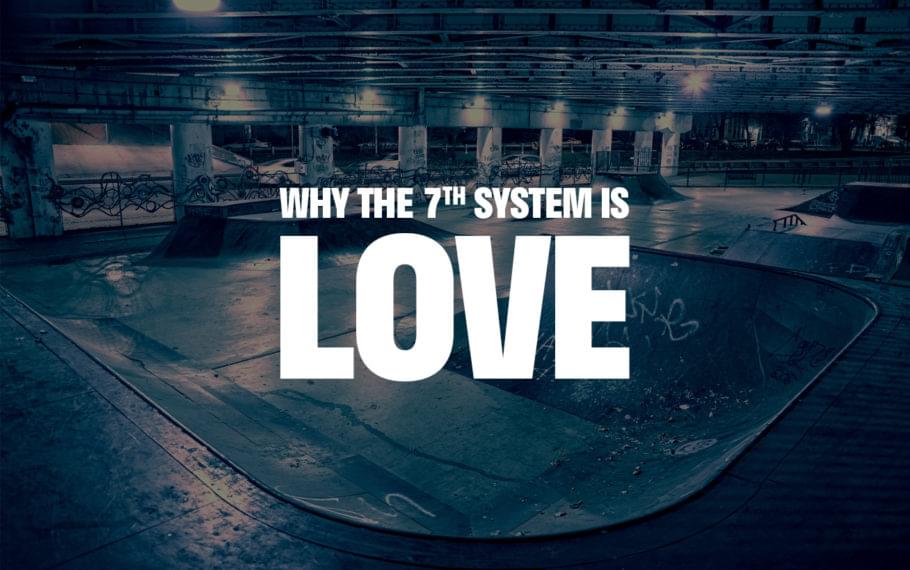 In back of the house where I was born and raised in sunny Southern California, there are six handprints in cement.

The first two are from my parents.

The next three are from my older siblings.

In newer cement, is my handprint.

Before my handprint was added, when I was young but old enough to understand, my parents took me out back, showed me the handprints from the rest of the family, and told me how their doctor had told them they would never have another child.

Then they mixed some cement, poured it in the missing spot, and I pressed my handprint into it.

When I began working on The 7 Systems of Influence I didn’t know what all the systems were, but when I got to six I knew there was something missing.

There was one more.

It took me a while to figure it out.

I knew I was missing a vital piece of the puzzle for my research into how the most influential people throughout history have created and maintained their influence.

I tried to fit a lot of puzzle pieces into that space.

For a long time I thought it might be mindset or attitude, but ultimately that didn’t seem right.

When I first thought of “love,” I was afraid to use it, because I thought it didn’t sound very professional, and at that time I was still thinking of The 7 Systems of Influence as a business book.

Sure, there were business books like Love is the Killer App that had the word “love” in the titles, but still–if you’re going to use “love” in a business book you better have a good angle, and I wasn’t sure I did.

What pushed me over the edge was two things.

First, I was once talking about parenting challenges with my partner at MWI, Corey Blake, and he said “If your kids know you love them, it makes up for a lot of mistakes.”

That seemed true to me, and in the years between when Corey first shared that thought and when I came to realize love would be the 7th System of Influence, I saw how true this is.

It may be that people often vote based on their pocketbooks, but if you ask them why they vote for a particular candidate or party, the answer will often boil down to some variation of “I feel like they care about me.”

Think back to a teacher who influenced you and changed the course of your education and perhaps your career.

What was it that made the difference? Was it how smart she was? Was it her high level of organization? Or was it that she cared about you?

Do you have a best friend or favorite relative? I’ll bet if you examine that relationship and why it has been so rewarding to you, you’ll find that it mostly comes down to that person caring about you, you caring about them, or both.

Only the warm heart can kindle warmth in another. –David O. McKay

The second reason I came to the conclusion that the 7th System must be love is theological.

One day I asked myself, “Who is the most influential person in the universe?” and I realized it was God.

My next question was “What makes God the most influential person in the universe, the perfect influencer?”

I’m a member of The Church of Jesus Christ of Latter-day Saints, and we believe God is three things:

In order for God to be the kind of being we can exercise faith in he must know all things and have power over all things, otherwise it’s possible to conceive of a being knowing something God doesn’t, or being able to do something God can’t, and that being would then be able to frustrate God’s plans and make Him unable to fulfill his promises to us.

What’s the point of exercising faith in a being who can’t keep his promises?

But even all power and all knowledge isn’t enough.

What if God knows everything and can do anything, but He doesn’t like me? Then I’m worse-off than if God didn’t exist at all.

But if God knows everything, can do anything, and He loves me and wants nothing more than my eternal well-being and happiness, then and only then I can trust Him and exercise faith in Him.

In terms of God’s influence, is it important to me to know that He knows everything and can do anything? Sure, that matters, but love is the game-changer.

Can influence exist without love?

Sure–Hitler was highly influential, and if there’s any doubt in your mind as to whether or not Hitler was a loving kind of guy, go read The Rise and Fall of the Third Reich. The man was not a “good guy” who was tragically misled or confused, he knew exactly what he was doing, he wrote it all down in Mein Kampf, and his intentions were evil from the beginning.

Hitler’s life ended in suicide, he brought ruin to his country, and he has become the modern archetype for evil incarnate.

Hitler’s avowed followers today, even allowing for the most generous of estimates and then quadrupling those numbers, don’t appear to come close to numbering more than a million, although of course even one is too many.

On the other hand, those who follow religions based on love like Hinduism, Buddhism, Christianity, Judaism, and Islam (yes, Islam is a religion of love, even if some of its adherents are currently as confused as the Christians who organized the Crusades) make up approximately 84% of the world’s population. That’s before you add in all the non-religious folks who subscribe to love, rather than hate.

If you want to be highly influential for the next few thousand years, the evidence would seem to point towards love winning the war over hate.

Influence without love is short-term, limited, and runs the likelihood of veering towards the negative, that is, death, suffering, and misery.

Influence with love is long-term, unlimited in scope, and supports peace, life, and joy.

I was already convinced by this point in my own journey that love was an essential ingredient of influence, at least the kind of influence I wanted to help people achieve.

I became even more convinced as I explored all the different meanings of love.

The Greeks had four different words for what they saw as four different kinds of love. “Storge” was love for one’s family or kin, “philia” was the love you have for a friend, “eros” was sexual and romantic love, and divine love was “agape.” When we say “I like you as a friend, but…” what we’re really saying is “I feel philia for you, but not eros.” When it comes to the 7th System, the kind of love we’re talking about is also most definitely not eros. Sorry, it’s not you, it’s me.

The way I define love for the 7th System is to break it into three parts:

All of us exercise influence in the work of our daily lives, whether we are teachers, business leaders, parents, lawyers, or engineers. Even if you work by yourself, you influence yourself.

Are you passionate about your work?

When you are about your work, do you experience moments where you feel a state of “flow” as described by Mihaly Csikszentmihalyi, author of Flow: The Psychology of Optimal Experience?

It is when we act freely, for the sake of the action itself rather than for ulterior motives, that we learn to become more than what we were. When we choose a goal and invest ourselves in it to the limits of concentration, whatever we do will be enjoyable.

If money or wealth is your primary motivation, then you are working for an ulterior motive, and regardless of how much or how little you make, you will find your work unfulfilling.

Not only does our work feel like drudgery when we work primarily for an ulterior motive, but our work is not as effective.

Children can sense when you do not enjoy your interactions with them, and are only interested in your primary motive.

Customers, employers, co-workers, and partners can sense when you do your work because it’s a job, and not something you enjoy doing.

But remember the second half of Mihaly’s quote, that whatever we are doing, we can create passion for it by investing ourselves in it and enjoying the challenges.

Do you love what you do? Then learn to love it, or leave it and move on to something you do love to do.

When my son was 7 years old he took up skateboarding.

When he learns a new trick, I know the joy of mastery he feels.

When he falls and bruises his hip and scrapes his elbow, I know the pain he feels.

I know how he feels, because I grew up skateboarding and still do it.

Both the joy, and the pain, are very recent memories, and there have been times when we’ve gone skateboarding together and both return home limping and moaning, which my wife does not find all too entertaining.

Whenever I see my son fall, I cringe, because it’s as though I’m experiencing it with him.

This is empathy, and we evolved to be empathic with one another.

The 3rd System of Influence is Audience. Do you feel empathy for your audience?

A friend of mine recently told me about a person he met who is currently enjoying quite a bit of fame in the business world. In talking with this celebrated business leader, the leader insulted his audience, his customers, declaring them to be “idiots,” and complaining about how he had to sign books at events.

I can’t help wondering how long his success will last.

The 6th System of Influence is Collaboration. Do you feel empathy for your collaborators, your partners, those you work with?

If not, how can you expect to influence them and make a lasting impact?

When I was a college student a professor of mine told a story about a friend of his who approached him and asked him to join him as an investor in a business deal.

Does that describe your relationships?

It’s worth noting at this point that none of us is perfect, and we’re all learning. I wouldn’t reject my children because they care more about themselves than they do about me. Children are born selfish as a survival mechanism, and it’s our job as parents to teach them how to turn outward and become giving creatures. It is through our care for them that they will learn to care for their children and keep the cycle in motion.

Regardless, the point is that when we care, our influence grows.

Is love enough by itself to create and maintain influence?

Love is a critical system to keep running in order to create and maintain influence with our audiences, but by itself it is restricted. Only by combining love, the 7th System, with the other six Systems of Influence can we maximize our impact.

Love is not satisfied to live with restrictions. It wants to grow.

If you have love, make the investment in the other six Systems of Influence so that your love for your work, whatever that work is, can find full expression.