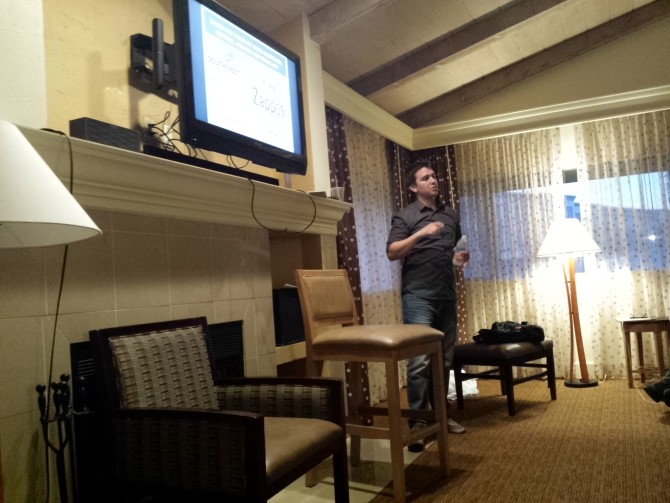 It’s 5:38 am. I’m sitting in the Phoenix, Arizona airport on my way to the Bay Area for StartupGrind 2015. I’ve been in Arizona for the past few days at a leadership retreat for MWI. Six of us gathered together, most of us meeting in person for the first time. Yeah, I hadn’t met half of my management team in person yet, despite us working together for the past several months. Welcome to the new way of starting a business.

Wait, Josh, didn’t you start MWI in 1999? Yes, that’s true, sort of. At least that’s the easier story to tell. I started doing web design for clients in 1999. The company’s name was “DonLoper.com” at the time. Don’t call me a naming genius. In late 2000 I brought on two partners. We renamed the company Mindwire Interactive. One partner left a few months later. The second partner and I worked together until January, 2003, when we sold the company. “Sold,” doesn’t accurately communicate what really happened. After selling my company, the company that bought us out went bankrupt, reneged on virtually all their commitments, and the deal ended up costing me about $40K. Plus I lost my business and all its assets. Live and learn. That’s what I get for ignoring my advisory board’s advice.

The next iteration of “the company” was called MWI, because hey, we’ve got this three letter domain mwi.com, and we’ve got to put it to good use, right? The next four years were hell. I didn’t get paid a dime during those years. I got into hundreds of thousands of dollars of business debt. I worked 100 hour weeks. I slept on the floor. I made myself into a martyr. It was foolish. I got lucky, because my wife stuck with me through it all.

During those years members of the MWI team came and left. I was pretty good at recruiting great people. I wasn’t so good at making sure they got paid on time. They were as loyal as they could afford to be. I don’t blame anyone for leaving during that time.

The company scaled up and down during the years. We would go from 2-3 team members up to 10, then back down to 3, then up to 10 again. Up and down, again and again. Each time it was like starting all over. But it was never stable. When we grew, it was a fluke, and a few months later we’d be in debt, trying to make a payroll without any revenues. We didn’t know why we succeeded at bringing in revenue when we brought it in, and we didn’t know why it stopped, so we were unable to keep it going. But I just couldn’t quit.

In 2007 I got rid of our office. We went virtual. I put everyone on contract. I didn’t have another full time employee for the next 6 years. In 2013 things changed. I decided I was ready to bring on a partner again. I needed someone strong on sales to figure out a process for landing deals. I found him. He started in earnest around September, 2013. A few months earlier I had started writing for Forbes. Then Entrepreneur. And others.  That writing has generated a flood of leads. My partner became an expert at landing deals. We found a formula for generating leads and closing deals which MWI had never had before. It is predictable. Now the fun part is scaling it.

Now there are 9 of us full time at MWI. We make payroll on time. We’ll hire 5-6 more team members in the next 1-2 months. Our revenues are about 3x our highest previous revenues, and they continue to grow. Retention is great. We have structures, processes, and a culture that never existed at MWI before. We don’t merely have a vision, we have a detailed plan, and it’s already working. It never really worked before. Not consistently, like now. Now we just have to scale it. This is the short version of the story. I haven’t even talked about moving to Hong Kong and opening an office there.

The point is, I started again. It’s not the first time. I think it will be the last. I’ve restarted/rebooted many times now. Does that mean I failed? I know I made a lot of mistakes. You can call it failure if it suits you. But I kept on going. I didn’t quit. And now, after 15 years of being a startup, it’s working out.

How does this apply to you? Quit, don’t quit, that’s not the point. I don’t know what’s right for you. Maybe I should have quit in 2003, or 2007, or 2012. All I can say is that I didn’t. Maybe you’ll quit and do something else. Maybe you’ll keep trudging ahead. Maybe you’ll figure things out, maybe you won’t. Maybe fate will be kind to you, or it will conspire against you. I climbed Camelback Mountain in Arizona yesterday morning. I went up, I went down. No big deal. I could easily have taken a wrong step, the rocks under me could have crumbled just a tiny bit, and I could have fallen off a cliff and died. We’re not in complete control of what happens in our lives. But we are in control of our choices. I chose to not quit. Now things are working out for me. Maybe you will also choose to not quit. And maybe, just maybe, things will work out for you, too.

Great post Josh! Awesome story and I’m glad you stayed with it. Btw, a little formatting error from my chromebook: http://goo.gl/sYaaPA

Got it fixed, thanks!