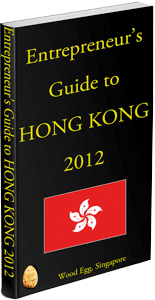 I got an email this morning from Derek Sivers about a new book called Entrepreneur’s Guide to Hong Kong 2013. This couldn’t be better timing for me, since I’m leaving Utah to move to Hong Kong this very week where I’ll be starting a branch office of MWI, and perhaps working on other business ventures there. The book isn’t out yet, but will be released this year. Derek told me he’s putting the finishing touches on it right now.

But it doesn’t stop there. Derek also has books in production on Cambodia, Japan, China, India, and more, 16 in all.

And by the way, if you don’t know who Derek Sivers is you should. He wrote a best-selling book a few years ago called Anything You Want which is a great read on the realities of being an entrepreneur. I read it about two years ago or so and a lot of it has stuck in my head.