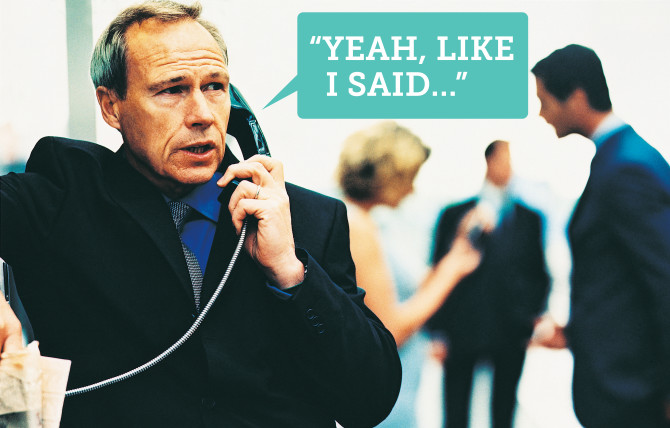 I’m doing research for an upcoming Forbes article and need your input. The article is on phrases we use, most likely unintentionally, that damage relationships. Perhaps you’ve heard them in the workplace, or used them yourself. Perhaps a client asked you a question you already responded to, and because you don’t want them to think you weren’t on the ball you feel the need to call attention to the fact you already answered the question, so you preface your response with “As I said before…”

The problem is that the translation of “As I said before…” is “As I said before, you forgetful moron…” There are other variations of this phrase such as “Like I said…” or “As I mentioned…” or the ruder and more intentional “I already told you…” Using such phrases makes the client feel dumb for having forgotten that you already answered the question. Yes, now they realize you were on the ball and they weren’t, but they also feel like they are stupid and that you’re a jerk. Nobody wins.

It’s hard to avoid saying such things, but it becomes much easier if we are aware of the phrases and flag them in our minds so that when the temptation arises, we can recognize it, cut if off, and respond in a better way.

I’m working on collecting 5-10 such phrases, their translations, and the better wording to use. Send me your ideas by posting comments below, and you might just make it into the article alongside some yet to be named business celebrities.

If you’re looking to get quoted in an article on the Forbes website, here’s your chance.

Hey Josh – I know tons of these phrases, both ones that we use toward others, but also ones we use toward ourselves. Feel free to drop me an msg with questions or to set up a time to chat.

I usually act like the stupid one in those situations as if I
forgot the issue/subject has been discussed before.

I use the phrases:

I remember you said that….

Help me remember what you said before about….

When I am asking or requesting something again;

You may recall that I asked for…….

Whatever happed to the idea/request for…..

When can we move forward on the idea/subject of….

Good luck on the article!

If these are the polite things to say, what are the “rude” phrases they replace?

If these are the polite things to say, what are the “rude” phrases they replace?

Thanks Carolynn, if you’re interested in the exposure then by all means head over to the blog and leave your comments there. I’d love to quote you in the article. Thanks!

How about “As we all know…” its very brash and assumptive. Very irritating!

“Well, actually…” is like saying “You are wrong and the real truth is…. I have to watch for that one. Instead I try to remember to say: Another idea is…. or another way to look at it is…..

A word that I used to use quite frequently and still notice people using in business is: BUT. For instance you may be in a conversation with a colleague/business partner discussing your view on where you think the future direction of the company should be heading.

Once you have finished talking, your partner replies by saying:

a) I agree with most of what your saying “But” in my opinion this is not the right direction for our company.

b) I see where you are coming from “But” in my opinion this is not the right direction for our company.

The word “BUT” basically negates everything they previously said within the sentence and presupposes to the other person that their thoughts are not acknowledged. Using the word “But” also makes it more difficult to get your point across because at this point the
other person is not as interested in the conversation and less likely to agree.

“In any conversation to be understood you first need to understand”

So instant of using the word “But” I now tend to use “And” instead. Lets take the same example but now introducing the word “And”:

Whilst this may seem like a simple change, it will make a huge difference to the quality of the conversations and relationships you have in business.

I think the word “should” is, in itself, pretty damaging. If you say “You
should…”, what you’re really doing is projecting your own belief
about something onto another. The subtle message is that if they don’t
do it, you’ll think they’re a bad person or, at best, that they’re not
living up to your expectations for them. Words like “should,” “must,”
“gotta,” “need to,” “have to,” etc. all do the same. If such a word is
used, I like to always follow it up with an “if…” That way I (and
another) can see clearly what the belief is that’s being expressed and
take an active part in accepting it or rejecting it.

A phrase that always bothers me is, “No offense, but……”

Invariably, the concluding part of the remark is always offensive! 🙂

These types of phrases always shine a negative spotlight.

My favorite alternative phrase is, “There must have been a miscommunication…..”

This phrase weights the scale equally with both parties. It doesn’t pit the blame on any one individual.

Because I’m teaching most of the time, I encounter the one you mention often: “As I said before” is tempting, but I’ve tried to replace it with “That’s an excellent question (or point). And that’s actually why, as you might recall, we (try to avoid using “I” if possible) talked about X before. It’s important to blah, blah, blah.” The blah, blah, blah being what you said before and what you now have to repeat. I can’t think of others off the top of my head, but I’ll let you know if I do.

I think the word “should” is, in itself, pretty damaging. If you say “You should…”, what you’re really doing is projecting your own belief about something onto another. The subtle message is that if they don’t do it, you’ll think they’re a bad person or, at best, that they’re not living up to your expectations for them. Words like “should,” “must,” “gotta,” “need to,” “have to,” etc. all do the same. If such a word is used, I like to always follow it up with an “if…” That way I (and another) can see clearly what the belief is that’s being expressed and take an active part in accepting it or rejecting it.

Yes! Totally, I’m glad you brought that up. Please post this on the blog
because I don’t want to lose track of your comment. That goes for everyone
else who has posted comments here on Facebook. I don’t want to forget that
you posted here, so please go to the blog and post there so I don’t forget
you.

Using the word “obviously”. I’m not sure if the phrase “to be honest” would fit the article or not, but it puts me on the alert when someone says it….

–
“You go to your church and I will go to mine.”
–
And that is the end to that conversation.
–

Thanks everyone for your comments, I couldn’t use them all because I ended up getting 60+ submissions from various sources, but here is the article.

The expression “As I said” makes me wince when i hear it. I disconnected someone on a phone call once, and have actually mimicked others when they used it on me. The irony is, that in many cases they were fuzzy in their explanations, so it warranted a clarification. Then i got the annoyed and condescending phrase. i also find the expression “Basically” very annoying and insulting, and commonly used by people with limited intelligence.

I find the blunt response to a question of “Yes and No” to be somewhat offensive. It insinuates both that the respondent is operating at a higher plain of thought than the questioner and that the questioner has not asked the question in an intelligent fashion. While this may be true, I feel there must be a more gracious way of responding.

I’m having a hard time interpreting this. I took the question in hand being from someone who asks you the same questions repeatedly for the same answer… Is it rude then to say, “As I said,” before answering yet again. I just feel like it’s a less confrontational way of pointing out frustration of not being listened to consistently.

One option would be to try and understand why the answer isn’t getting through. Perhaps something like, “I can’t help but notice that I’ve given you the answer to this several times in the past, but you’re asking it again. Maybe I’m not understanding your question and so I’m not giving you the right answer?”
That way, they can clarify their question, or if they just keep forgetting the answer they can let you know that. Either you’ll be able to help them better, or you’ll get the point across that they keep asking you for the same thing, without being offensive.