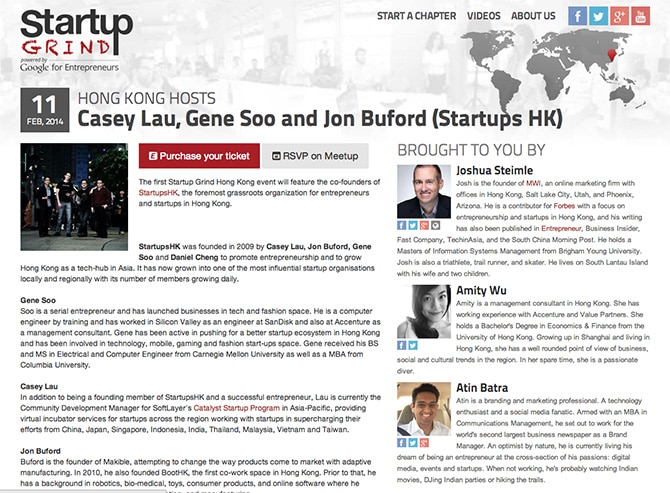 I’ll confess that three months ago I had never heard of Startup Grind. I had been talking with Jeremy Hanks from Doba/Dropship Commerce about bringing his event series LaunchUp to Hong Kong, and we were pretty far down that road. The idea behind LaunchUp is to bring the entrepreneurial community together for a sort of “barn raising” to help startups get launched. The format would be an inspirational presentation from a successful entrepreneur followed by pitches from three startups. And I wanted it to be a huge event, held monthly. But I was starting to realize it was going to be a bit of work, and that I didn’t have any experience managing an event series. Of course the entrepreneur in me said “No problem! It’ll all work out.” But I was a bit worried about how well it would really work out.

Then, two months ago or so, Casey from StartupsHK approached me at an event. He told me about Startup Grind, and that they had reached out to StartupsHK about launching it in Hong Kong, but that the StartupsHK founders were all too busy, and would I be interested? I said I’d be happy to look into it. When I saw what Startup Grind was doing, I realized it was a lot like LaunchUp, but smaller and simpler, with a slightly different focus. Each event is a fireside chat between an interviewer and a successful entrepreneur, and that’s it. There is networking before and after, maybe some pizza, and the interview is recorded and put up on the Startup Grind website. I  saw that Startup Grind had a huge brand that was established and growing quickly. I liked the event, and I felt like it would be great experience for getting LaunchUp off the ground in the future. Actually, my initial thought was to try and do both simultaneously, but I soon realized I should put LaunchUp on the back burner and focus on Startup Grind, if they would have me.

To get signed up as a director for the Hong Kong chapter of Startup Grind I went through an informal interview process, mostly by email with one phone call, with Derek Andersen, Startup Grind’s founder. I discovered that we were both transplants from Utah, both went to Brigham Young University, and are both Mormon. And we have all the same friends. How in the world did we not know each other already? We hit it off, and I got signed up.

At the same time I was getting signed up, Derek had also received an application from Amity Wu who was splitting time between her hometown of Shanghai and Hong Kong. Derek invited us to be co-directors, so Amity and I started communicating online and working together to get it launched. A little while later Atin Batra applied as well, and became our third co-director. The latest to join, just this week, is Adrian Ma.

The four of us work as a loose team, with each member doing whatever they want, or whatever they happen to be able to do. Atin is great with social media, so he takes care of all the website stuff and the social media accounts (follow us @startupgrindhk). I have been working a lot on publicity thanks to my media connections. And all of us are doing bits and pieces of everything else, of which there is more than you would think for what I had previously seen as a small, simple, easy event.

Our first event is scheduled for February 11th, 2014. We’ve got some of the founders of StartupsHK as our interviewees, although it turns out we’re not supposed to have panels but just individual guests (whoops!).

Derek and his team have been great. They use a Basecamp account to manage communications between all the chapters (now over 75 worldwide) and the headquarters. But we can also communicate with other chapters, and everyone shares their experiences about what works, what doesn’t, what they’re learning, etc. There’s a great spirit of cooperation and excitement as we all see this grow.

We’re now already planning for our next event in March, and the months thereafter. We have to find speakers, venues, sponsors, and manage all the logistics involved. Startup Grind is a paid event, so we do have some financial means to pay for food, and perhaps we’ll have enough in the future to fly speakers in and put them up in a hotel, as long as the speakers don’t charge us anything themselves 🙂 Theoretically we could make money doing this, but I don’t see it going that far. I think what we’ll get out of it is mostly going to be a great experience, lots of new connections, and the opportunity to help entrepreneurship and startups grow in Hong Kong. That’s enough for me.