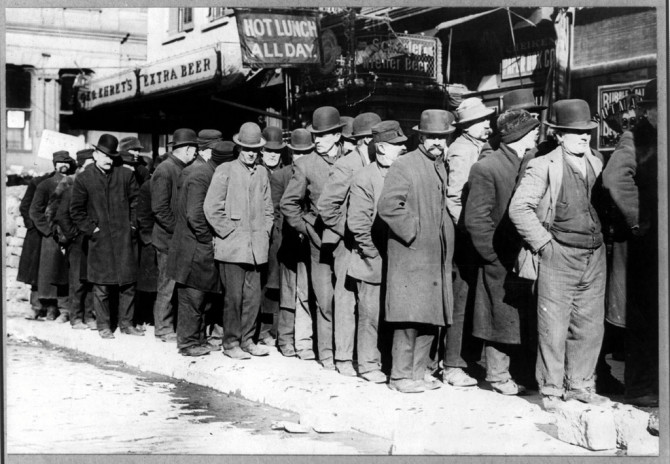 If I were jobless today, straight out of college, with no experience or technical skills, what would I do to get a job? I wouldn’t get a job at all. I’d create one. I’ll explain how in this post. But first, take a look at the photo above.

No, these men aren’t waiting in line for the latest iPhone, they’re waiting for someone to give them some bread so they can live another day. These breadlines that existed during the Great Depression of the 1930’s aren’t all too different from the job fair lines we’ve seen in modern days. Whether it’s a group of able-bodied men completely dependent on someone else to give them their daily bread, or another line of men waiting for a job so they can buy their own bread, it’s still depressing. Yes, there are times when misfortune strikes. I could be on the street tomorrow with no option but to beg. This post isn’t about judging those who find themselves in a situation where they depend on the generosity of others, it’s about changing an unnecessary and harmful mindset held by many–the idea that a job is something that someone else gives you. Only slightly less harmful is the idea that a job is something you find. As though jobs exist like flowers to be picked, and once they’re gone, those who didn’t find their flower fast enough are out of luck.

The damage is in thinking that jobs are a finite thing. That there are only so many to go around, and if someone else gets a job, they’re taking that from you. Or if they get a better one, you end up with a worse one. Unfortunately our societal mythology perpetuates this lie. What’s the truth? That as long as there is a single human being in the world, there will be more jobs than everyone can handle. If there is ever a scenario where there are “no jobs” you can rest assured it is an artificial condition, most likely created by a government (cases in point: high unemployment amongst young minority populations in U.S. due to rising minimum wage which makes these workers cost more than most employers are willing to pay, given that they can employ experienced employees for the same price).

But even in such circumstances, there are more than enough jobs to be had. Jobs are created by the needs and wants of people. Have you ever found a group of people, small or large, that said “We have everything we need and want, and we can’t imagine a single thing we need or want which isn’t already provided for us for free.”? Even if that were the situation, there would still be new jobs to be created, because people often don’t know they need something until they have it.

I like to imagine what I would do if I were back to square one, without anything but my mental abilities, but without even the knowledge I have today. What could I do to not get a job, but create one that is truly interesting? What follows might not be the steps that will work for you, but they might.

1. Find an interesting topic and become an expert. What gets you excited? Dive into that topic and become an expert on it. What does it take to be an expert? You just need to know a little bit more than whoever you’re talking to. It’s somewhat like the case of the two men running away from a bear. How fast does either man have to be to escape from the bear? Just slightly faster than the other man. The guy you think is an expert on something doesn’t have to know a lot more than you do. He just needs to know a little more than you do in order to come off as an expert. And it doesn’t take much time or study to become more knowledgeable in a certain topic than most people. Want to become an expert on growth hacking? Start reading growth hacking articles. You can become something of an expert on the topic within a few days, because most people don’t know a thing about growth hacking. Chances are you’re already an expert at something, you just don’t know it.

Case in point, when I graduated from college what was I an expert at? I wasn’t an expert at any one thing, but if you combined the various things I knew well, I knew some things very few people did. Some of my interests were skateboarding, marketing, and technology. Lots of people knew more about the skateboarding industry than I did. Lots of people knew more about marketing than I did. Same goes for technology. But how many people knew as much as I did about skateboarding, marketing, and technology? Not many. What intersections of knowledge do you have that are unique to you, or a small group of people?

2. Start talking about it. Even better, write about it. Publish your thoughts on the LinkedIn Pulse network. Publish on Medium. Create slide decks to go along with what you write, and post them on SlideShare. Share what you write on Twitter, Facebook, and LinkedIn. Create an infographic using Canva to go along with your topic and post it on Pinterest. Do some research (going back to Step 1 above) and then publish it like Jens Andersen of RunRepeat.com did, and get it into 50 publications in the process. You can do all of this for free, or with very little money. Best of all, throw up your own blog, like this one, per my instructions here, and start building traffic to real estate you own and control. Tip: focus on growing your email list.

3. Look for people who need your help. Tim Ferriss was already famous when Charlie Hoehn reached out and offered to help. Charlie gave Tim an impressive pitch. Then failed. Then succeeded. After a rocky start, Charlie had a wild ride on Tim’s coattails. Charlie didn’t ask Tim for a job. Tim wouldn’t have had time to think of something for Charlie to do. Charlie had to show Tim that if Tim hired him, he could immediately add value without taking anything away. Didn’t quite work out that way, but it was a good enough pitch that it got Charlie in, and Tim was gracious enough to work with him until Charlie succeeded.

Need some more inspiration? Learn how to hustle like Jack Smith.

Maybe you’re not at all techie. Maybe you don’t like writing. Or talking. Doesn’t matter. You can still become an expert at something, if you aren’t already. You can still communicate that expertise to someone, somehow. Who can you approach who needs your help because you have knowledge nobody else has, and you can see how you can contribute value immediately, without a huge investment? These opportunities are all around you. Walk into any business, anywhere in the world, and you can find 100 things the manager or business owner needs to be done, or done better. I’ve got at least that many, but instead of giving me a pitch on what specific value-add they can bring to my business, I get people sending me resumes, asking me to take my time looking at them, and then asking me to figure out where they might be able to fit into my business. What about if those people told me where they can fit into my business, instead of asking me to do that work for them? Sadly, this rarely happens.

Creating a job isn’t hard. But most people are still trying to find jobs because they’ve been taught that’s the way the world works. Someone rich and powerful hands jobs out, and if you’re lucky, you’ll be there to catch it. Forget that. Go create a job. You’ll make more money, be happier, and have your self respect.